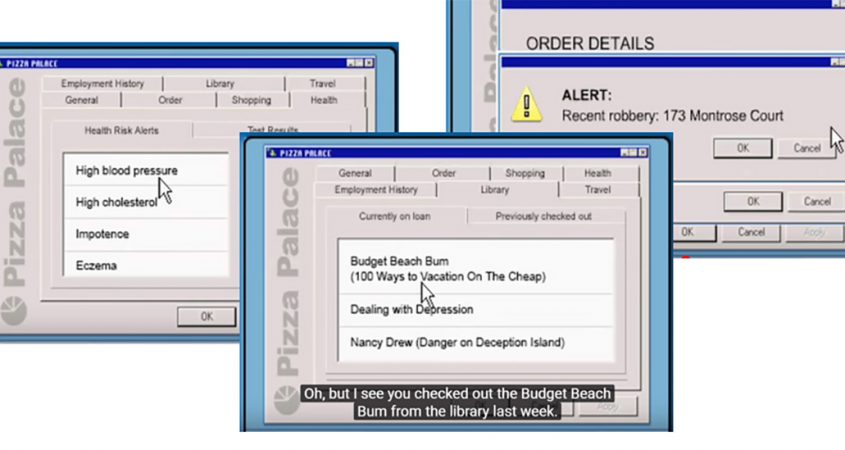 If you want to illustrate something abstract, connect it with an experience everyone understands, like ordering food. Extra points if you get a few laughs.

The American Civil Liberties Union did it in 2004, to show how scattered records of personal activity can be centralized and connected to a unique identifier.

“Scary Pizza” was their darkly funny and prescient video, warning of a boundless new appetite by government and business for personal data. It featured a mock cellphone call to a pizza restaurant, where caller ID also reveals an extensive customer profile.

“That video was, for many years, the most watched piece on the ACLU’s site,” Senior Policy Analyst Jay Stanley, the lone veteran of the education campaign that produced the video, told Digital Privacy News.

Stanley’s not sure how many times “Scary Pizza” was viewed. The ACLU wasn’t keeping detailed records of website traffic in 2004.

He does know it went viral, a term that wasn’t yet widely used, and that it was translated to other languages. Versions posted later on YouTube have been viewed, in total, more than 700,000 times.

The video’s script was adapted by ACLU staff from a humorous email message that was shared so many times the original author was no longer identifiable, Stanley said.

An ACLU employee played a cheerfully judgmental pizza-shop employee. A friendly outsider took the role of the grudgingly compliant customer.

The order-taker greets the customer by name, telling him she’s “wired into the system.” She combs through his medical records (the “Double Meat Special” clearly isn’t a good idea), recent travel (a Hawaiian vacation left him broke), and bank records (his credit cards are maxed out. “Bring cash, OK?”).

“Scary Pizza” was a deft follow-up to a report Stanley co-authored about technology’s dire threat to privacy. It declared that George Orwell’s vision of Big Brother had arrived.

The 2003 report made the rounds on Capitol Hill as Patriot Act provisions were being implemented with newer, cheaper video technology and tracking from cellphone location data.

Simultaneously, the commercial market for personal data was offsetting losses from the dot-com bust. Businesses were feasting on information from consumer responses to surveys, loyalty programs and product registration forms, the report warned.

The nation now faces another crisis that demands government action. Even before COVID-19, government and business were engaged in ever-greater projects to collect Americans’ data, validating most of the ACLU’s predictions.

“Our privacy has continued to deteriorate in many ways,” Stanley told Digital Privacy News. “We’ll see how this (pandemic) changes history.”

It’s difficult to know the impact of any single public-education campaign, even one with a hit video. Stanley believes “Scary Pizza” lent momentum to many subsequent privacy battles. Its notoriety has not been matched by any later effort.

“For years,” he said, “people at the ACLU, working passionately on some injustice and wanting to attract public attention, would say, ‘We need another pizza video!’ Another great, funny, trenchant, viral piece.