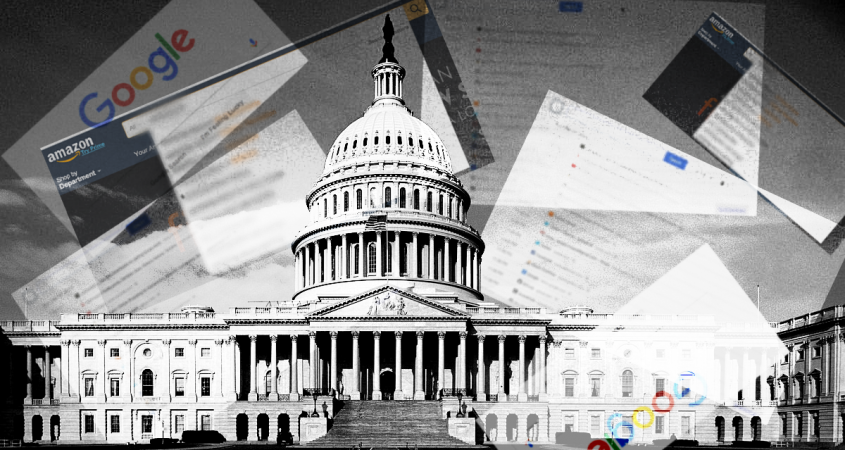 This week, a bipartisan duo of senators, Oregon Democrat Ron Wyden and Montana Republican Steve Daines, proposed an amendment to U.S. law that would have prevented intelligence agencies from accessing citizens’ internet search histories without a warrant.

“Getting access to somebody’s web-browsing history is almost like spying on their thoughts,” Wyden told Digital Privacy News and other outlets. “This level of surveillance absolutely ought to come with a warrant.”

But on Wednesday, the amendment, which needed 60 Senate votes to pass, failed on a 59-37 vote, despite bipartisan support.

Here’s how we got here — and what’s next.

Section 215 of the USA Patriot Act, which President George W. Bush signed into law a month and a half after the 9/11 attacks, amended and expanded the Foreign Intelligence Surveillance Act (FISA) of 1978 to allow the FBI and other intelligence agencies to collect “tangible things (books, records, papers, documents and other items) for an investigation to obtain foreign intelligence information” if they were “relevant to an authorized investigation.”

As Edward Snowden revealed, the National Security Agency treated everything as relevant. The Electronic Frontier Foundation (EFF) later wrote, “The government was using Section 215 of the Patriot Act to collect the phone records of virtually every person in the United States.”

When the Patriot Act expired in 2015, parts of it, including Section 215, were subsequently reborn later that year within the USA Freedom Act, which included some measures to protect civil liberties and to curb such bulk surveillance.

With the FISA provisions were set to expire again last December, Congress extended them to March 15 in a 2019 spending bill, unaware that coronavirus would complicate reauthorization.

Although the House of Representatives passed H.R. 6172 on March 11, the Senate did not — and the FISA provisions lapsed.

As COVID relief efforts gave way to coronavirus recovery measures, the Senate put H.R. 6172 back on the schedule, with Senate Majority Leader Mitch McConnell, R-Ky., expressing support for the bill as written.

Nonetheless, Sens. Wyden and Daines, along with several colleagues, pushed amendments to the House bill.

To the passive observer, why the Wyden-Daines amendment was necessary might not be obvious — since the NSA announced the suspension of its bulk surveillance program in 2019 after the Freedom Act had seemingly narrowed its ability to collect data under Section 215.

“While the government has said that it does not collect information under Section 215 that would require a warrant in the criminal context, unfortunately, we do not have complete clarity as to how the government interprets this split over web-browsing information for 215 purposes.”

While H.R. 6172 includes a requirement that Section 215 can’t be used “under circumstances in which a person has a reasonable expectation of privacy and a warrant would be required for law enforcement purposes,” it does not speak to internet searches.

“The Daines-Wyden amendment would have clarified that this rule should also apply for internet search and browsing history,” Sarkesian said.

“There is widespread support for this type of reform, so advocates and reformers will continue the push to codify it.”

The clarification is important because the U.S. Supreme Court has not ruled on the constitutionality of warrantless collection of internet searches, though some lower courts have invoked the Fourth Amendment in such cases.

Yet all is not lost, however.

For starters, though the Wyden-Daines amendment failed, the Freedom Act has not yet been reauthorized. That’s because the full act passed by the Senate on Thursday included a separate amendment brought by Sen. Mike Lee, R-Utah, to modify amicus provisions, which was adopted.

Therefore, the bill must go back to the House of Representatives for another vote and then to the White House for the president’s signature or veto.

Moreover, the Wyden-Daines vote was close.

“The Senate vote shows that the vast majority of the senators want to ensure that any demand for search or browsing history be supported by a judicial finding of probable cause,” Mana Azarmi, policy counsel at the Center for Democracy & Technology in Washington, told Digital Privacy News.

Sarkesian remained hopeful that Congress eventually would make clear that the government can’t access internet search histories without a warrant.

“There is widespread support for this type of reform, so advocates and reformers will continue the push to codify it,” she said. “And, today’s environment, in which we rely almost exclusively on the internet for so much of our lives, demonstrates this need more than ever.”

Jeff Benson is a writer in Nevada.