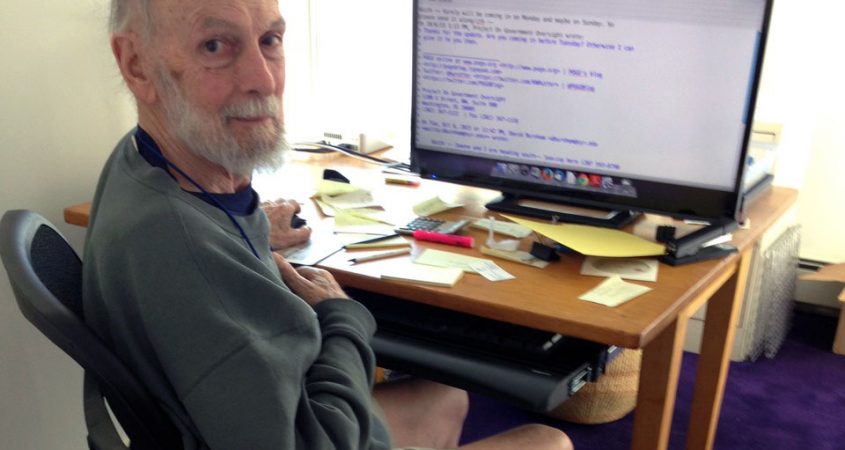 Now 87, Burnham is co-director and co-founder of the nonprofit Transactional Records Access Clearinghouse (TRAC), a nonpartisan research organization in Syracuse, N.Y., that since 1989 has maintained and analyzed a vast database of federal enforcement, staffing and financial information.

During his long career as a journalist and at TRAC, Burnham has worked to hold federal agencies accountable for accomplishing their stated goals.

In today’s report, Burnham told Digital Privacy News that the collapse of the media is a primary reason privacy is in greater jeopardy today.

Would people be surprised to know how much data is being collected by the government?

I think they would be surprised at the extent of it, yes, and at how much Facebook and other large organizations are collecting it and keeping it and distributing to anyone who wants it, and how it’s being used.

That’s partly because no journalists are covering it as they used to.

But the middle class gets great benefits from this.

“People’s privacy has been very, very much reduced — and the big corporations are actively working for that.”

People can quickly get their credit or medical data or what have you, but they don’t think about the downside.

The real problem is that people’s privacy has been very, very much reduced — and the big corporations are actively working for that.

Corporations are not actively supporting even the weak privacy laws that exist, much less big, strong privacy laws.

(Facebook CEO) Mark Zuckerberg has even come in to talk Congress out of passing strong laws.

And you need those if you’re going to get anywhere in restoring Americans’ right to privacy — and maybe our democracy. We need those laws.

The European Community is terrific. They passed a serious privacy law, but there are strong pressures to go the other way.

Does social media have a responsibility to fact-check the president?

In a perfect world, they certainly have a right to do that under the Constitution. Holding the president accountable is what all the media should do, and what all Americans deserve.

But for most of them, that’s not where their interest lies.

In “A Law Unto Itself,” you discussed the size, power and lack of oversight of the IRS by Congress. How has that changed since you wrote it?

The House Ways and Means Committee is in bed with the IRS. It was a bad situation then. It’s a worse situation now — and the American people should be concerned.

I would love it if more people were doing the necessary research. It’s not spot news; it’s looking at how government operates and functions — and that takes time and a lot of work.

The IRS book is just about how it functions. It’s not about tax laws. That hasn’t changed much.

In fact, IRS operations have gotten worse because Congress has cut the budget of the IRS — so they’re able to do less of the checks that they’re supposed to do.

He and Long, the nonprofit’s co-director, established TRAC in 1989. The nonpartisan research organization:

Still, Burnham lamented: “That can be useful, but you need a reporter, a person who has some general knowledge of what they’re trying to do.

“And, sadly, there are fewer of those than there were then.”

You said in one interview that FDR and Nixon were the biggest presidential abusers of the tax code. Why?

At the time I wrote it, I held that belief. Roosevelt, for example, used the tax laws to go after Huey Long, his opponent who was out to destroy him politically.

Kennedy used it to go after the civil-rights agitators who were giving him fits — and Nixon used everything he had against his perceived enemies.

Now, I think the real point is that it’s not just Roosevelt and Nixon and Kennedy, but all presidents take advantage of their powers to win elections.

It feels like we’re in a dystopian novel where things are falling apart.

Yep. I think it does.

If you were working as an investigative reporter in 2020, what would you investigate?

I would investigate (Attorney General William) Barr and the order he just got from the president to form a task force on terrorists. That’s what I’d be investigating now.

“Holding the president accountable is what all the media should do, and what all Americans deserve.”

I worry he’s going to try to pin the terrorist label on people who are legitimately critical of the government and protesting its abuses.

One person’s freedom fighter can be another person’s terrorist.

It’s a very discouraging time for democracy in the United States — and maybe in the world.

During a 1981 interview, Ted Koppel borrowed the NRA’s “guns don’t kill people, people do” slogan and asked whether you believed the same was true for personal computers. You then questioned whether society was “alert enough to understand the power of the computer and to use it for good.” How do you feel now about society’s understanding of the risks from computers? Have we used them for good?

The public has gotten less and less information about how this is important, because of the collapse of the media.

You know, I think the press has been ruined by the computer.

Among other things, the computer allows people to go off and create a lot of really fake news organizations.

I, for years, have thought that (James) Madison’s checks and balances would save us. Now I worry that it may not work.

Now, we could get a new president, and the world may change. But people in the middle just don’t know what’s going on.

They don’t care, or a lot of them don’t care — and the organizations interested in privacy are getting fewer and fewer.

Is there a solution?

I’m concerned about the public’s lack of information, the media’s lack of concern, Congress’ blindness to the problem.

That combination makes the hope of attacking it harder and harder, more and more difficult to achieve. It’s so obvious to me.