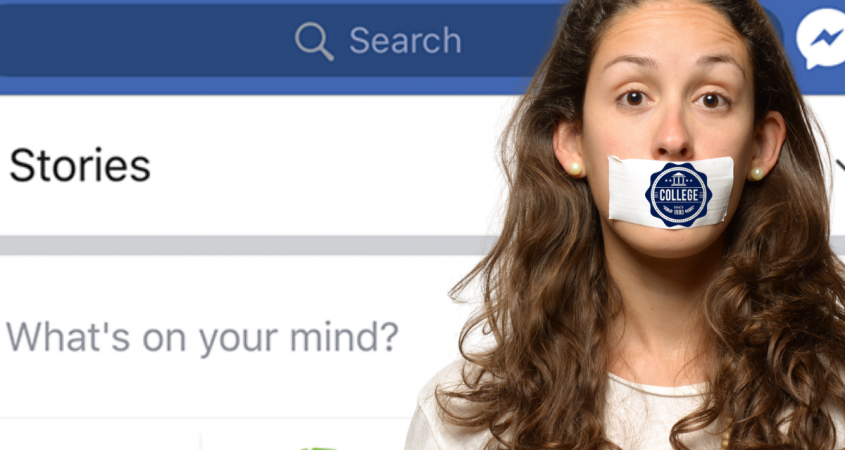 The “blocklists” limit student comments on Facebook when accounts are accessed via university networks. The institutions’ filters flag certain words, automatically hiding the comments that contain them.

“State universities are preemptively censoring large swaths of protected speech and altering the public discourse with just a few clicks of the mouse — and Facebook gives them all the tools they need to do it,” Robert Shibley, director of the Foundation for Individual Rights in Education (FIRE), told Digital Privacy News.

Facebook did not immediately return requests for comment nor did the American Association of Colleges and Universities (AACU).

Blocklists are filters that control what goes through a network’s data. Everything is allowed through, unless it’s specifically denied access via a list of predetermined elements.

With Facebook, the company’s software provides a basic list of terms it generated within the company, but universities create their own lists — usually based on university controversies, sports teams and local issues.

The terms are selected by university public-relations staffers, based on a customized list of prohibited words curated by the institution, said Adam Steinbaugh, director of FIRE’s Individual Rights Defense Program.

“Institutions have a tendency to resist controversy — and that’s often true when you have PR people running the Facebook accounts.”

Blocklists work just as they sound: If a banned word is in a student’s post, the entire comment is automatically removed. The student is never notified of the action — and the conversation in the feed continues, according to report FIRE released in April on the controversy.

“Institutions have a tendency to resist controversy — and that’s often true when you have PR people running the Facebook accounts,” Steinbaugh told Digital Privacy News.

But the universities argue they are only utilizing the tools Facebook provides to everyone.

According to the FIRE report: “These tools include Facebook’s automated content filters, which allow state institutions to automatically ‘hide’ users’ comments if they contain words included on Facebook’s undisclosed list of offensive words or the government actor’s customized list of prohibited words.”

“So, when Facebook gives them that tool, they’re going to wind up abusing it.”

More broadly, private institutions also have been found to use blocklists, Steinbaugh said, but their students are not protected under the First Amendment.

According to the Freedom Forum Institute, which runs the First Amendment Center at Vanderbilt University in Nashville, Tenn., “There is a fundamental distinction between public and private school students under the First Amendment.”

“You shouldn’t treat students as children who are supposed to be protected from ‘dangerous ideas.’”

While Facebook is a private company and is not violating the law in providing the blocklists, public universities are under different legal constraints because they receive government funding.

“If someone says something that upsets the university, the university should come back and tell them why they think that they are wrong and go back and forth in a debate,” Michael Suman, a sociology professor at the University of California, Los Angeles (UCLA), told Digital Privacy News.

“You shouldn’t treat students as children who are supposed to be protected from ‘dangerous ideas.’

“You should be forming them to be mature, responsible citizens of our democratic society, where it’s important to debate all these ideas,” Suman said.

The AACU has a “Statement of Principles on Academic Freedom and Tenure” posted on its website.

Liberal education, according to the statement, should “foster agency in thought, speech, and action, serving as an accelerator for the emergence of a diversity of informed perspectives and for the development of critical listening skills that invite the broadest possible range of voices to engage in more speech, not less.”

In addition, Facebook’s privacy policy says the platform takes it upon itself to enhance “the security and safety of the service” by “investigating suspicious activity or violations of applicable terms or policies.”

“Unfortunately, FIRE’s survey revealed that many institutions abuse Facebook’s tools to censor critics and activists, including students, family members, and the general public,” the groups said in the letter.

However, UCLA’s Suman said the institutions should be held accountable for using the software, not Facebook for providing it.

“That doesn’t remove the responsibility,” he told Digital Privacy News. “That’s a copout.”

Zuckerberg on Freedom of Expression

Facebook founder and CEO Mark Zuckerberg long has espoused his beliefs on freedom of expression, most notably in an October speech during a “Democracy in the Digital Age” conference at Georgetown University.

Here are some of his words: