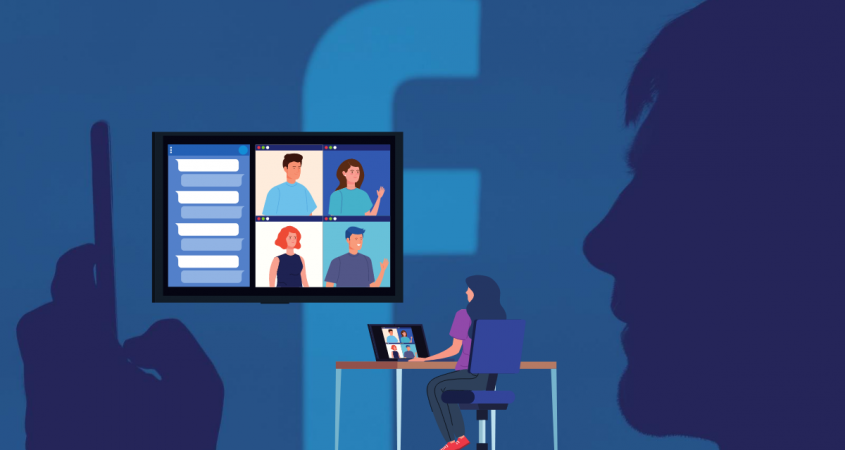 “In terms of privacy, I would consider FBMR to be slightly higher-risk than Microsoft Teams and definitely better than Zoom, but on a par with Google Meet,” said U.K. privacy expert Rowenna Fielding.

“Both Facebook and Google’s business model is based on harvesting people’s data to profile them for microtargeting of advertising,” she explained, “whereas Microsoft doesn’t data-mine enterprise products — and Zoom has clarified that they don’t data-mine user content at all.”

Fielding, head of individuals’ rights and freedoms at the data-protection consultancy Protecture in Bristol, was just as ambivalent about Messenger’s security features.

“It’s difficult to say whether FB Messenger Rooms will be more or less secure than other services,” she told Digital Privacy News. “Most of Facebook’s security issues so far have been to do with who they have chosen to allow to access people’s data rather than accidental breaches.

“All of these services have admin tools that allow users to invite, remove or block other people from access — and provide controls on the amount of data shown to other users of the service,” she said.

Egan also said that “audio and video from Rooms won’t be used to inform ads,” but some privacy advocates challenged the efficacy of those claims to Digital Privacy News.

Introduced in April, Facebook positioned Messenger Rooms as an alternative to Zoom Communications Inc.’s platform, which had been plagued with “Zoombombing” and other privacy issues, particularly since the spread of COVID-19.

The service allows anyone with a Facebook account to initiate a group video chat with as many as 49 other participants.

But Facebook immediately came under fire for lacking end-to-end encryption (E2EE) in its Rooms, unlike other video-chat apps like Apple’s Facetime, Signal, Microsoft Teams — even WhatsApp.

This allows anyone to potentially access and listen in on these private video chats, including Facebook’s.

Amid pressure from privacy and human-rights advocates, Zoom agreed last month to provide full end-to-end encryption to all users, after first saying it would only provide the service to paying customers.

However, for all Facebook’s reassurances regarding security, the video-chat feature in Rooms is not end-to-end encrypted.

Fielding told Digital Privacy News: “There is a ‘secret conversations’ feature to FBMR that does use E2E encryption and stores message data only on the end devices for a more secure option.

“However, the video-chat feature is not end-to-end encrypted, meaning that it is potentially vulnerable to interception or impersonation.

Los Angeles technology journalist Sam Biddle observed: “Rooms’ lack of E2E encryption means that Facebook, technically, could access video chats if they wanted to. And if an outside hacker were able to penetrate Facebook, they could, technically, access that data as well.”

“It means that Facebook itself could potentially do so.

“This also includes scenarios such as rogue-employee entering sessions, Facebook surreptitiously providing the government with access to Meeting Rooms after receiving a (police) warrant — or hackers gaining access to sessions via Facebook,” Steinberg said.

The “data policy” appears to be purposely vague on the information Facebook will collect. One such statement reads: “To provide the Facebook products, we must process information about you. The type of information that we collect depends on how you use our products.”

Fielding told Digital Privacy News: “Although the FBMR policy states that user content itself will not be used for profiling and targeted advertising, user metadata is not explicitly excluded from being used for data-mining.

“The implication being, therefore, that it is used in this way,” she said.

According to Biddle, “Messenger Rooms is subject to the same privacy policy as other Facebook products, but the problem is that this policy provides very few specifics about how your data will actually be used.

“The risk to users is that you have to basically trust Facebook to not abuse your data.

“People should be skeptical anytime Facebook says it’s not interested in a user’s data, because their entire history shows the opposite.”

Last year, for instance, Facebook admitted to hiring outside contractors to transcribe audio clips from users — some of which contained vulgar content — later promising to end the practice.

“Facebook’s definition of privacy seems to be ‘protected from everyone except Facebook,’” Fielding observed, “which is ironic — because most of the privacy threat on the platform comes from Facebook themselves and their commercial partners.

“The privacy policy is heavily focused on how the user can protect themselves from other users of the platform.”

On monitoring Room video chats, Facebook’s Egan said in the April blog: “Regardless of whether you use Rooms through your Facebook account or join as a guest, we don’t watch or listen to your audio or video calls.”

“Rooms’ lack of E2E encryption means that Facebook, technically, could access video chats if they wanted to.”

But the platform could be tracking and collecting data in ways most people don’t think of, experts told Digital Privacy News.

“If the government wants to know with whom you are speaking on WhatsApp, for example, it can obtain a warrant and find out — even if you have end-to-end encryption enabled.”

But Egan said in the blog that Facebook might collect some data from users who use their app without an account to “to provide the service and improve the product experience.”

But Fielding told Digital Privacy News: “Metadata can be just as revealing and sensitive as message content itself.

“Sophisticated attackers might be able to enter, watch and-or record a session.”

“Facebook’s privacy policy indicates that metadata is used for profiling — and targeting analysis of social-graph data can reveal a lot of information about a person’s lifestyle and activities, especially when this is combined with all the other data that Facebook collects.”

“There’s very little reason to have full confidence in either Facebook or Zoom’s commitment to user privacy, based on their histories,” journalist Biddle said. “Both companies state publicly that they’re committed to privacy, but their actions don’t match their words.

“I’m not sure if one is worse than the other — although Zoom, at least, offers end-to-end encryption, while Messenger Rooms does not.

“On the other hand,” he told Digital Privacy News, “Zoom has a problematic relationship with the Chinese government.”