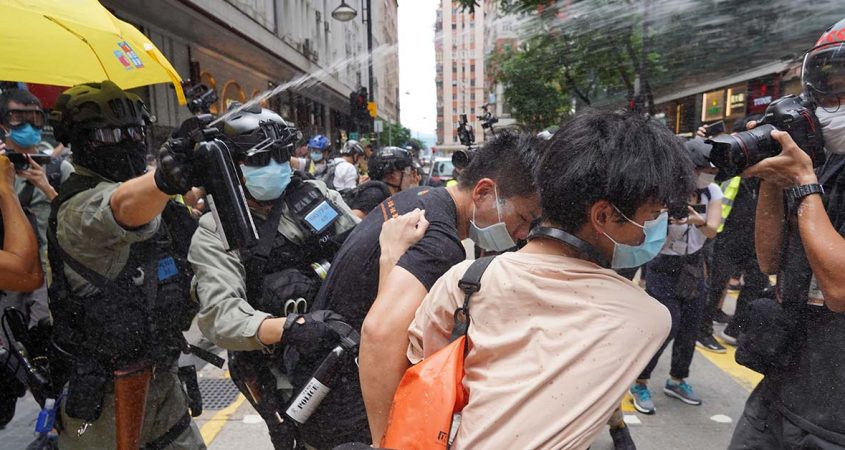 First of a series.

In this series of weekly reports, Digital Privacy News examines the ramifications of Beijing’s actions — beginning with today’s discussion of the historical events leading to China’s decision.

Twenty-three years ago this summer, the former British colony of Hong Kong was returned to Chinese sovereignty.

However, this extraordinary international event — popularly described as “The Hong Kong Handover” — only came about after more than a dozen years of often acrimonious negotiations between London and Beijing.

When the final agreement, known as the Sino-British Joint Declaration, was signed in Beijing by the U.K. and the People’s Republic in 1984, the Chinese pledged to the British and the United Nations that for 50 years after 1997, Hong Kong would remain largely unchanged.

Under Hong Kong’s miniconstitution, known as the “Basic Law,” the city would rule itself. And its six million-plus people would continue to enjoy all the rights and freedoms they long had relished under the British.

These included freedom of assembly, freedom of speech, freedom of the press, and the rule of law — rights and privileges that had never existed under the 71-year one-party rule in the People’s Republic of China.

In the interim, however, the people of Hong Kong continued to develop their vibrant and openly social and political society — one that continued to diverge from what long had existed on the mainland.

This rang alarm bells with Beijing.

By 2003, the CCP began to chip away at the city’s promised freedoms, by activating a bill inside the Basic Law — known as “Article 23” — that would charge Hongkongers with crimes that only existed on the mainland.

They then could be taken across the border for a nonjury trial conducted by the Communist Party.

This attempt brought more than a half-million peaceful protesters into Hong Kong’s streets that July 1 to oppose Beijing’s move — the second largest since the 1997 handover.

In response, the Hong Kong government dropped the idea, as China operated under the guise of allowing local authorities to make all the legal decisions about the city and its people.

Protests, large and small, continued over the years — as Hongkongers rallied for democratic ideals and a way of life seen as being under a growing threat.

In 2012, 90,000 people marched in several rallies against a proposal to introduce “Moral and National Education” to all Hong Kong schools. Residents feared that such a curriculum would be tantamount to embracing mainland political propaganda that espoused communism over democracy.

Hong Kong Chief Executive C.Y. Leung, who supported China, determined that he would give schools discretion on implementing the curriculum. It quietly died.

Then, in 2014, Beijing sought to pre-screen candidates running for Hong Kong chief executive, akin to an American city mayor. This resulted in yet another massive series of peaceful sit-down strikes across the city.

The demonstrations consisted of hundreds of thousands of mostly young people, lasting 79 days and eventually dubbed the “Umbrella Movement” by the media. The term was said to have enraged China’s rising president, Xi Jinping.

Turmoil then returned again for most of last year, when the Hong Kong government — under intense pressure from Beijing — again tried to push for Article 23, the extradition bill.

Despite increasingly violent police crackdowns, two million people demonstrated for nearly eight months — before they were abruptly halted by the arrival of COVID-19.

Finally, on June 30, the end of its patience with protesters reached, Beijing pushed aside Hong Kong’s fragile and fragmented local legislature, announcing a sweeping “security law.”

The CCP now solely decides what those “relevant” materials and services are.

Anyone defying the demands could be charged with endangering China’s “security,” resulting in prison sentences of three years to life.

Hong Kong now finds itself in a perilous David vs. Goliath situation. Genuine privacy has never been permitted on the mainland. And now, the CCP plans to demolish Hong Kong’s privacy as well.

What’s more, the party has an array of tools to achieve this.

Historically, Beijing could employ an enormous army of paid human informants. Now, China is a world leader in electronic surveillance.

According to various international sources, including the U.S. think tank Jamestown Foundation in Washington, the Chinese reportedly spends more on domestic surveillance of their own people than they do on military forces to repel foreign foes.

The nation currently boasts 200 million CCTVs, the vast majority now having the most advanced facial-recognition technology on the planet. And that number reportedly is expected to climb to 626 million by 2030.

By comparison, America operates about 50 million public cameras, most of which only can be operated under exacting legal guidelines — precise parameters that don’t exist in China.

And now, the latest talk in Hong Kong is that China’s famous “Great Firewall” — its heavily censored and carefully monitored version of the Internet, which can block virtually any foreign website — will be expanded to Hong Kong.

Much of this, however, is fevered speculation, because if Beijing wants to maintain Hong Kong as a major financial hub, it must allow the free flow of information.

VPNs allow users to create a secure confidential connection via another network to the Internet. Not only can this allow access to otherwise restricted websites, but it can shield prying eyes from individual browsing activities.

At the moment, VPNs are legal in Hong Kong.

The government’s focus, however, was only on regulating the use — and abuse — of personal data in the commercial world, in such sectors as direct marketing, or to prevent data theft.

Indeed, one of the most impressive examples of online data theft in Asia occurred two years ago, when Hong Kong’s national flag carrier, Cathay Pacific Airways, confirmed that the personal data of up to 9.4 million passengers had been leaked.

This included passport details, email addresses, travel history and expired credit-card information. The airline stated that no evidence of the misuse of data had been found.

But the revelations raised many questions throughout the city, even among pro-China news organizations: Who stole the personal data? And for what purpose?

Many Hongkongers say they know the answer to both questions.

As an uber-modern, technology-loving people, Hong Kong residents have numerous vulnerable points where the CCP can easily breach their privacy without breaking a sweat.

For young Hongkongers, especially, virtually all their daily financial transactions are carried out on smartphones. It’s the reality of the situation.

Such actions, then, detail everything about them — from where and when they took mass transit (to a public march, restaurant or pro-democracy meetings with friends?) to the purchase of goggles (to protect their eyes from police tear gas, proof of attending an “illegal assembly”?).

To escape this latest and sweeping legal snooping, savvy Hongkongers now have switched back to cash.

However, Hong Kong police now are profiling young people — stopping them and asking why they are carrying cash instead of processing payments through their cellphones.

Hong Kong’s striking modernity makes it an easy target for privacy thieves. The city boasts one of the world’s highest levels of Internet penetration — well north of 90%, with WhatsApp levels of nearly 80%.

In many ways, China’s moves in Hong Kong are the perfect example of how a powerful, technologically astute government can come to completely control all aspects of other people’s privacy — as no legal structures are in place to protect them.