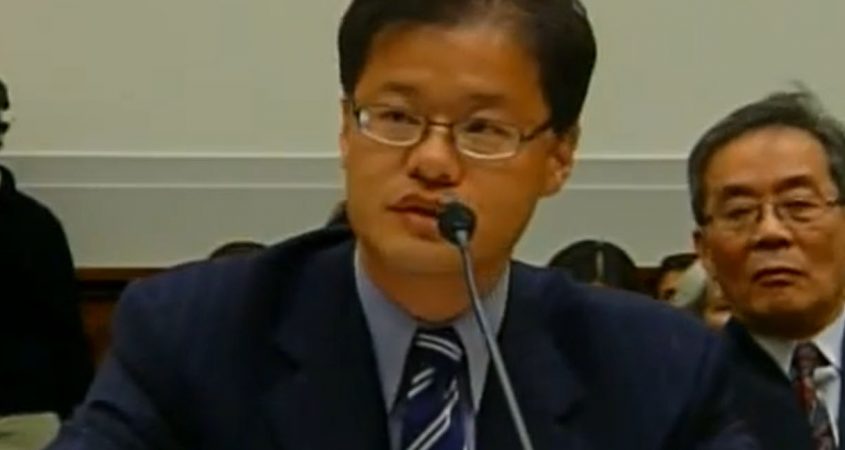 While in Hong Kong, Yang made two predictions — and both proved to be very perceptive.

His first was that, over time, many millions more Chinese than Americans would become regular internet users.

This seemed like a farcical forecast at the time.

Because despite its name — “the World Wide Web” — it widely was seen as very-much a Western invention, with British and American contributions.

And, in any case, the sole language on the net at that time was English.

As of last December, China had 854 million internet users — more than double that of the United States, with just over 313 million users, according to the German online data portal Statisa.

China now is, by far, the nation with the most internet users.

When they arrived, however, they would all have to bend to Beijing’s demands — pandering to the Chinese Communist Party (CCP) if they wanted access to this huge and, then, new market.

Several years later, however, Yang himself would quickly fold to the same pressure.

In late 2004, a mainland-based journalist, Shi Tao, discovered that the Chinese government had ordered the mainland media not to report any mention of memorials outside of China marking the 15th anniversary of Tiananmen Square.

Talk of the 1989 massacre remains taboo in China.

The reporter anonymously notified a pro-democracy website in the U.S. about the censorship via a Yahoo email address.

Squeezed by Beijing, Yahoo provided the names of the recipients of the message, the sender — and the time the email was sent.

The Chinese journalist was convicted of “divulging state secrets abroad.”

Two years later, appearing at a hearing of the U.S. House Foreign Affairs Committee, his second appearance, Yang apologized to the families of Shi and Wang Xiaoning, a dissident who was sentenced to prison on subversion charges after Yahoo’s Hong Kong affiliate disclosed the contents of his email account to Chinese authorities.

“I want to personally apologize to them and what they and their family are going through,” Yang said at the hearing, though it did not keep legislators from badgering him for providing the information to Beijing.

Yang also tried to justify Yahoo’s action, telling The New York Times: “To be doing business in China or anywhere else in the world, we have to comply with local laws.”

But the Paris-based nonprofit, Reporters Without Borders, countered: “Does the fact that (Yahoo) operates under Chinese law free it from all ethical considerations? How far will it go to please Beijing?”

In 1997, the year Yang had warned Western internet firms what they’d have to do to gain access to the Chinese market, China’s GDP was a modest $961.6 billion. This year, according to the World Bank, China’s GDP is expected to reach $7 trillion.

While China uses Hong Kong’s currency and equity to attract foreign funds, Hong Kong’s key importance as an investment portal for the mainland also has been shrinking in recent years, according to experts.

In the four weeks since Beijing imposed its new “security law” on Hong Kong,  virtually all the key global players in social media — Facebook, Google, Zoom, Twitter, WhatsApp, Telegram, Microsoft — have announced they would “temporarily” decline to hand over user data to Hong Kong’s government when asked.

This, pending a more detailed look into the law, the companies said. They also intend to consult with human-rights experts.

However, this pressure on Hong Kong companies is not new.

Names of the protesting staffers, including some pilots and flight attendants, apparently were discovered after searches of their social media accounts.

“We employ 27,000 staff in Hong Kong doing all sorts of different jobs,” he told journalists. “We certainly wouldn’t dream of telling them what they have to think about something.”

But shortly afterward, he resigned from Cathay Pacific, ending a 39-year career with the airline’s holding company.

In the fortnight prior, Cathay CEO Rupert Hogg also resigned under pressure from the mainland. Hogg was widely hailed as a hero for refusing Beijing’s demand to deliver the names of all employees who had participated in the demonstrations.

Hogg responded to Beijing with a list, but it contained only one name: his own.

Meanwhile, international banks in Hong Kong — including HSBC, Credit Suisse and UBS — were directed last month to scrutinize whether their Hong Kong clients had ties to the pro-democracy movement.

Clients with such links, which also could be gleaned from searching social-media networks, could then expect to encounter difficulties being served by these banks, according to news reports, especially regarding business they might have — or want to have — on the mainland.

How long American IT firms can resist Beijing is questionable, observers said.

A marketing director for a major social-media firm with several offices in Asia, including Hong Kong, spoke to Digital Privacy News — on the strict condition that neither he nor his company be disclosed.

“Our people here — and I’m certain that it’s precisely the same with all our competitors — are sitting on our hands and just waiting to hear from headquarters,” he said.

“The people in our home office are wildly busy crunching numbers — calculating how much revenue they’ve been making here, how much they’re now earning in China, and how much potential there is to earn in China in the coming years.

“Then, they have to calculate if that ‘potential’ figure is enough to follow all of Beijing’s requirements for access to our customers’ private online information,” the marketing director said.

“Yet, they must also be deeply concerned about the possibility of very serious blowback coming from their upset U.S. customers, which could be disastrous.

“The wild card here, though, which no one wants to talk about (publicly), is China,” he continued. “Beijing can tell us today that if we do all that they want, we will then all have full access to the market, forever and ever.

“But actually, a few years down the road, they can change their mind, and say: ‘That’s it, we don’t want you anymore. We can produce all our own social media, designed for our people. So, please leave.’

“And that,” the marketing director told Digital Privacy News, “is what’s also pressing on the back of everyone’s minds.”