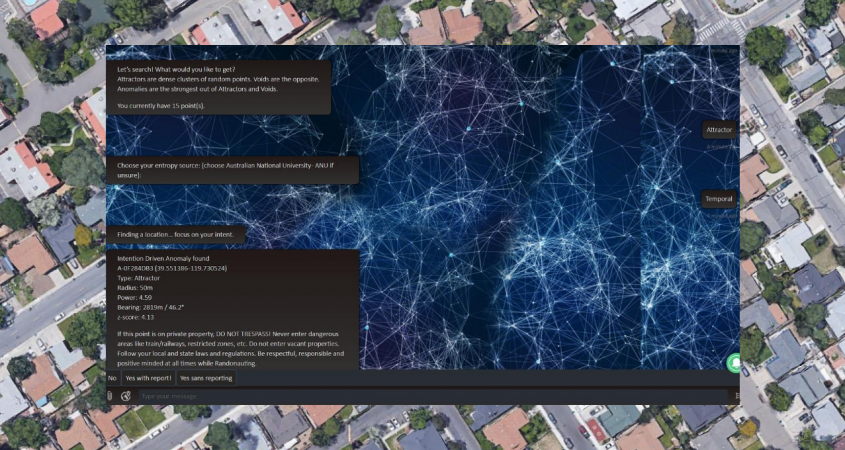 It’s not often I get into my car and not know where I’m going.

Channeling my inner Gen Zer and TikToker, I downloaded the Randonautica app on my cellphone, letting fate — or randomly generated coordinates — decide where to go.

The Randonautica app, launched earlier this year, was created by Randonaut LLC, which — according to its terms of use — is based in Papillion, Neb.

The app is described on its website as a “quantumly generated, choose-your-own adventure reality game” for users to explore the world around them by visiting randomly generated points.

Before a user goes randonauting, however, they are encouraged to set a purpose or “intention” for something they hope to find on a trip.

Intentions may range from a certain emotion to a color or to any abstract concept or symbol. The user then shares their location through the app and travels to the provided coordinates.

Randonauting recently became popular after a viral TikTok video showed a group of teens in Seattle discovering a suitcase containing human remains that had washed up on a beach while following the Randonautica app’s coordinates.

“If you’re worried about that location-tracking privacy data … you may be revealing things about your patterns and locations and habits.”

On that note, I set my intention to “happiness” and put the car in drive.

My trips took me to residential backyards of strangers’ homes, the middle of a lake, gated businesses — and points so deep in the woods they were inaccessible.

Not wanting to trespass on private property, which the app advises against, I often remained in the car.

But I did travel through areas I had never seen before: a campground hidden behind a dam and side streets I never knew existed.

On the few occasions I reached the Randonautica coordinates, I found myself at a loss for finding a representation of happiness.

Randonautica is fun and interesting, she said, but the app has potential for privacy concerns.

Golbeck said she tested the app in the Florida Keys last month, finding most of her points in the Atlantic Ocean.

“I could kayak out to that spot,” she said. “I’ve been there before. It’s just water.”

Golbeck explained how she doubted that the generated coordinates were manipulated by the app’s creators to lead users to certain locations.

“I think it’s mostly random, maybe with a little bit of suggestion,” she told Digital Privacy News, explaining that user feedback might result in the app sending similar coordinates to other users.

Golbeck said that as users generated and visited points through the app, a list of all the locations they traveled to might be used to provide insight into their whereabouts.

“If you’re worried about that location-tracking privacy data, even if you’re not worried about it, you may be revealing things about your patterns and locations and habits,” she said.

A Randonautica team member told Digital Privacy News that the app did not collect user data other than data analytics from Apple and Google and locations that were inaccessible to developers.

User accounts are not needed — and the app only asks for user location to generate coordinates.

“They’re using a quantum computer … to spit out the locations depending on where the user lives.”

Randonautica is currently working through its user agreement and service terms to implement stringent rules for user safety, the team member said.

The current privacy section of the terms of use reads: “To provide the services, we need your location, and we only use your information where we have a legal basis to do so.”

If users discovered that the coordinates generated by the app were manipulated, Randonautica would receive significant backlash.

“I think they’re using a quantum computer sitting there to be able to spit out the locations depending on where the user lives,” he said.

While Golbeck said she finds herself deleting other apps on her phone immediately after using them to protect her privacy, Raundonautica isn’t one of them.

“If you’re not worried about location tracking and that kind of data being aggregated somewhere, I would say it’s pretty safe to use,” she said.

Randonaut user Cindy Nguyen lives in Philadelphia and used the app when heading out with friends last month.

While she said her experience was fun and allowed her to explore new places with friends, she said she was cautious of the app protecting her privacy and was concerned that her location could be intercepted.

“It’s someone giving you random coordinates, even if it’s computer-generated, who can see that information?” Nguyen asked. “Someone can just pinpoint you in a set of coordinates.

“It sounds so cliché, but you just have to be careful and use your best judgment.”

Rachel Looker is a writer in Washington, D.C.