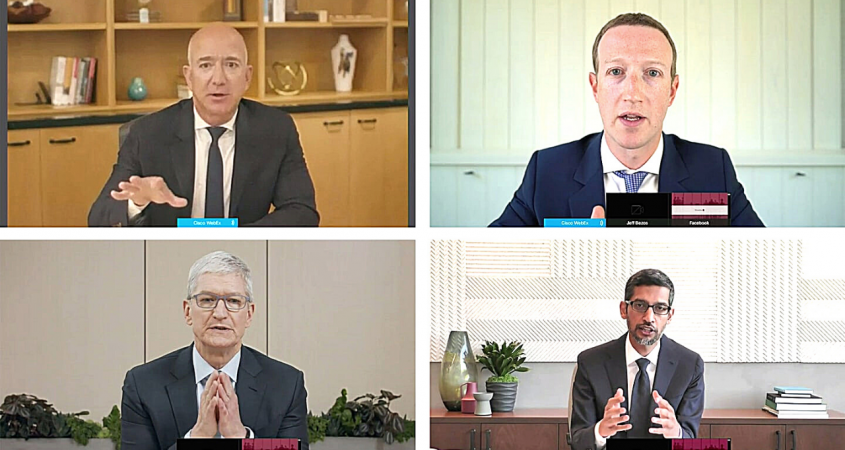 Their July 29 session before the House Judiciary Subcommittee on Antitrust, Commercial and Administrative Law came as part of the panel’s yearlong investigation of whether these technology giants were in fact monopolies using their market size to steal from, subsume or eliminate competitors.

Elizabeth Renieris, a fellow at Harvard University’s Berkman Klein Center for Internet & Society, told Digital Privacy News the hearing was a chance for the subcommittee to highlight evidence it had collected in the pursuit of determining “whether existing antitrust laws are still fit-for-purpose in the digital age.”

Facebook “uses our data to manipulate us into engaging and buying and spending time and clicking on whatever Facebook wants.”

During the hearing, the topic of data privacy came up at several points. Here are five instances during the five-hour hearing when digital privacy came to the fore — and how the CEOs responded.

Rep. Henry Johnson, D-Ga., asked Apple’s Cook about the company’s requirement that developers use Apple Pay to sell their products through the company’s App Store.

“You collect their customer data — and  you use that data to inform Apple as to whether or not it would be profitable for Apple to launch a competing app,” Johnson asserted. “Isn’t that correct?”

Cook’s answer, however, focused on how much Apple charges developers to place their products in the App Store, not the ethics of collecting customer data to jumpstart rival apps.

“Sir, 84% of the apps are charged nothing,” Cook replied. Others pay 15% or 30%, depending on their subscription method, he added.

Johnson, then, asked follow-ups about the commission structure, letting the data-privacy issue drop.

Bezos said Amazon only looked at aggregate data, though he admitted when pressed that that sometimes only two sellers were in a product category.

Renieris noted that, although the hearing was more about presenting a case for reform than getting answers to questions, one of the biggest revelations was that “Jeff Bezos couldn’t guarantee that Amazon adheres to its own policy against using third-party seller data to boost its own products and services.”

Daniel Susser, a philosopher and ethicist at Penn State’s College of Information Sciences and Technology, told Digital Privacy News that, while creating rival apps was not necessarily unethical, “politically, I think it demonstrates just how much power these firms have — not only to set the terms of the market, but also to crush competitors.”

Democratic Reps. Val Demings, Fla., and Lucy McBath, Ga., challenged Cook about removing apps for parents to monitor and limit their children’s online usage — the implication being that Apple had done so to bolster its own version, Screen Time.

Cook said to McBath: “The technology that was being used at that time was called MDM (mobile device management) — and it had the ability to sort of take over the kid’s screen, and a third party could see it.

“And, so, we were worried about their safety.”

He told Demings that more than 30 parental-control apps were in the App Store. (Screen Time, however, is preinstalled on iPhones and iPads.)

In other words, not all competing apps in this category were fully purged.

“That the company removed these apps and does nothing to remove the ‘stalkerware’ on its platform proves the company does not enforce its own policies honestly.”

“When advocacy organizations and researchers tell Apple how some of its tools and apps can be used for intimate partner violence,” Waldman said, “Apple will often say that the apps have legitimate uses — and they’ll put up information or recommendations putting the onus on victims to protect themselves.”

Congresswoman Mary Gay Scanlon, D-Pa., charged Google with “knowingly collecting data on children under 13 on YouTube and offering advertisers the ability to target those children directly,” in violation of federal law.

“Jeff Bezos couldn’t guarantee that Amazon adheres to its own policy against using third-party seller data to boost its own products and services.”

Pichai responded that Alphabet, which also owns YouTube, had created YouTube Kids, a separate platform, to better enforce its “policies” and that it had removed videos that it believed could endanger child safety.

“Well, I’m more concerned about the fact that you’re investing rigorously in luring in advertisers, like toymakers Mattel and Hasbro, by telling them that YouTube is the number one website regularly visited by kids,” the lawmaker replied.

“So that sounds like you’re targeting the kids and then targeting advertisers to bring them on board.”

Pichai responded, in part: “Everything we do here, we obviously comply with all the applicable regulations.”

Rep. Pramila Jayapal, D-Wash., told Facebook’s Zuckerberg: “Facebook is a case study, in my opinion, in monopoly power, because your company harvests and monetizes our data — and, then, your company uses that data to spy on competitors and to copy, acquire and kill rivals.”

She did not ask Zuckerberg a question on the matter — and he did not get a chance to respond.

Waldman told Digital Privacy News that he didn’t need to: “Facebook exactly does this. It’s spyware and Mark knows it.

“It doesn’t just use our data to spy on rivals,” he added. “It uses our data to manipulate us into engaging and buying and spending time and clicking on whatever Facebook wants.”

Near the end of the hearing, Georgia’s McBath reminded Zuckerberg of the company’s 2004 privacy policy, which stated, “We do not and will not use cookies to collect private information from any user.”

The Facebook CEO told McBath that was still true: “We’re not using cookies to collect private information about people who use our services — and I believe we’ve upheld that commitment.”

He clarified that the company instead used cookies primarily “to make sure that someone can stay logged in on web” or for security.

“Zuckerberg is good at going right up to the line of a lie,” Waldman commented.

While cookies do collect plenty of information, Zuckerberg may not consider that data to be private because, said Waldman, he has a “craven and myopic vision of privacy that serves his own profit-making ends.”

“Nowadays, Facebook’s ‘like’ button and pixel program are embedded in a huge number of websites — and there are lots of other ways to identify users, so they can probably collect all the information they need about us without cookies.”

Although the session was something of a formality punctuating the end of an investigation, Harvard’s Renieris told Digital Privacy News: “The hearing mattered to the American people, providing a kind of public airing of grievances against these seemingly above-the-law companies through our democratically elected representatives.”

This isn’t the first time Big Tech leaders have been questioned by Congress, however.

This time, though, policymakers — at least Democrats — demonstrated a better grasp of the issues than in previous hearings, Waldman said.

However, the party divide was dramatic.

“Politically, I think it demonstrates just how much power these firms have — not only to set the terms of the market, but also to crush competitors.”

“The Republicans were and are completely disinterested in knowledge, facts or actually regulating big tech,” he said, referring to the ranking party member of the subcommittee, Rep. Jim Jordan, Ohio, and several others.

They used their allotted time to discuss whether tech companies were trying to silence conservative voices.

“This hearing didn’t hammer any nails into the coffins of any of the monopolies at the virtual dais,” Waldman said, “but it showed us who in Congress actually cared about people’s privacy and plans to do something about it: Democrats.”

Without oversight, Big Tech can dictate the rules of their own games and selectively use the word “privacy” for their own ends, as Cook and Zuckerberg arguably did when addressing parental-control apps and cookies, respectively.

“There is a long history of powerful people and powerful institutions using privacy as a pretext for enhancing or amplifying their power.”