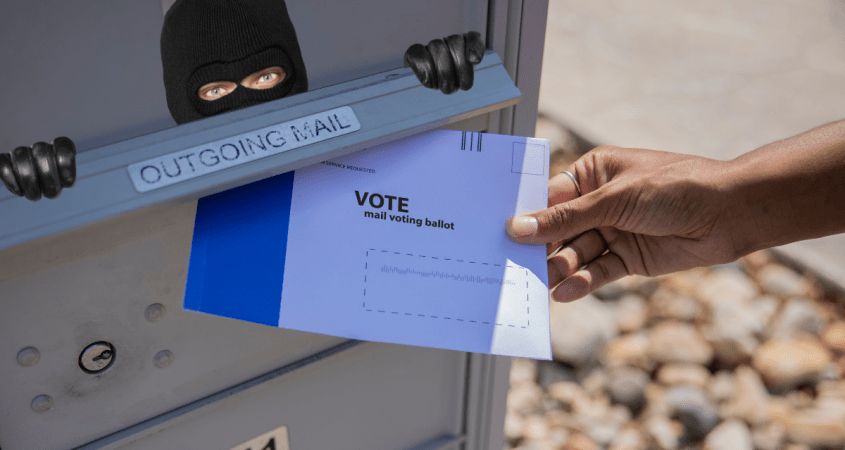 Americans’ trust in the U.S. Postal Service has emerged as a focus of intense concern for the Nov. 3 general election.

Last-minute changes and court challenges are sowing confusion about the typically perfunctory process of mailing in a ballot, but both the Postal Service and a former agency manager, now a consultant, confirm the unique privacy protections that cover ballots handled through first-class mail.

Raymond worked 35 years with the USPS before retiring in March 2003. He most recently had served as a manager of process and integration, overseeing policies regarding mail classification.

“There has always been a priority to handle balloting materials promptly.”

“The fact that judges have ordered that certain types of mail be handled in certain fashions reiterates the law,” Raymond said. “If they’re now going to be treating, under court order, balloting materials as first class, it’s not much different from what they were doing anyway.

“There has always been a priority to handle balloting materials promptly,” he said.

The judges concurred with arguments from six states and cities that recent USPS service cuts and equipment removal already were forcing delays that could prevent mailed ballots from being delivered on time.

In the latest rulings, U.S. District Judge Emmet G. Sullivan in Washington agreed with the states — New York, Hawaii, New Jersey — and the cities of New York and San Francisco in issuing two injunctions against the Postal Service.

Sullivan also sided with 15 voters and voter-registration groups in a separate action, according to news reports, which argued that the resulting mail delays would deny thousands of people the constitutional right to vote.

The cities and states alleged that Postmaster General Louis DeJoy was required to submit service changes to the Postal Regulatory Commission before implementing them — and they accused him of informing Congress that he had no intention of returning collection boxes that already had been removed or bringing back high-speed sorting equipment that also had been removed.

“It is clearly in the public interest to mitigate the spread of COVID-19, to ensure safe alternatives to in-person voting and to require that the USPS comply with the law,” Sullivan wrote in a 39-page opinion released Sunday in the New York state case, according to reports.

“The potential for voter disenfranchisement is immense” in the 28 states that require ballots to be received by Election Day, Sullivan wrote in his Monday ruling in the voter lawsuit.

As many as 80 million Americans are expected to vote by mail on Nov. 3, The Washington Post reports, with 3.7% to 9.3% waiting until the Saturday before Election Day to send in their ballots.

The role and reliability of the Postal Service remains a rare point of shared concern for Republicans and Democrats according to a study released last week by the University of California San Diego.

“Despite the polarization, we see support across the board for making voting more accessible,” Mackenzie Lockhart, a UC political science doctoral candidate and co-author of the study, said in releasing the findings.

“Despite the polarization, we see support across the board for making voting more accessible.”

“In all our surveys, a majority of Republicans and Democrats supported not only making vote-by-mail ballots available to anyone who wants them,” he added, “but also sending ballots directly to every registered voter, regardless of how they intend to vote.”

The turmoil also has prompted many local election boards to set up alternative drop-off sites and boxes for ballots, for voters who fear that they mailed ballots will not be processed in time to be counted for the election.

“Voters are responsible for understanding their local jurisdiction’s rules and requirements for participating in an election,” a USPS spokeswoman told Digital Privacy News. “The Postal Service also recommends that voters explore the resources available from their local election officials for information about deadlines, rules, policies and other requirements in their locality.”

UPS or FedEx an Option?

But with all the controversy over how any Postal Service changes might affect the election process, questions have arisen about sending ballots by private courier or carrier, such as FedEx or UPS Inc.

Because the USPS operates under federal supervision, special privacy protections cover first-class mail that do not extend to correspondence, including ballots, sent through such private services.

“Utilizing proven mail-fraud detection and loss-prevention strategies and countermeasures, postal inspectors will continue to actively identify attempts to compromise the mail system our nation is depending on during this critical time,” the USPS spokeswoman said.

“In doing so, the (agency’s) inspection service will be working closely with our state and local law-enforcement partners, as well as the Department of Justice and the Federal Bureau of Investigation, to respond to and investigate election crimes involving the U.S. mail.”

Further, the official stamp of the postmark to document the moment when ballots enter the Postal Service system, creates legitimacy around a mailed ballot that does not exist with other forms of service delivery, Raymond said.

“If you have serious concerns about mail tampering, contact the postal inspector general and say, ‘We’ve got a problem here,’” he advised. “And that will be investigated.

“The inspection service is very good at its job.”