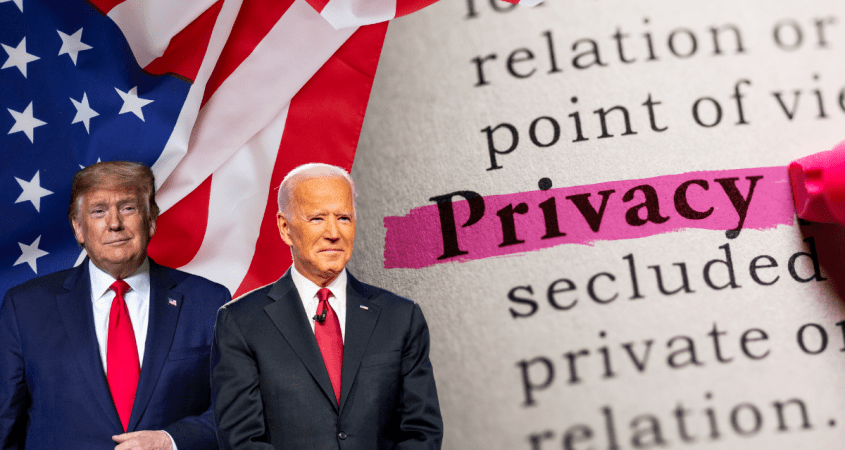 The 2020 presidential election is a week away — and with it comes the chance for each candidate to determine the direction of data-privacy issues for the next four years.

From regulating social media platforms to enacting stronger privacy legislation, either Republican President Donald Trump or former Democratic Vice President Joe Biden may get the chance to shape the future of digital privacy if re-elected or elected to office.

“When we’re sitting here in January 2021, we will continue to see both the new Congress and the next administration discuss data privacy in some way,” Jennifer Huddleston, director of technology and innovation policy at the American Action Forum (AAF), told Digital Privacy News.

With both candidates lacking clear privacy policy platforms on their campaign websites, data issues may appear to be on the back burner during the time of a public health crisis.

“We hear a lot of statements in some ways from both candidates about various tech-related issues, but technology hasn’t necessarily gotten the same level of discussion as certain other policy issues,” Huddleston said.

“We will continue to see both the new Congress and the next administration discuss data privacy in some way.”

Both campaigns did not respond to requests for comment from Digital Privacy News.  However, the past statements and actions of both Trump and Biden indicate their positions on privacy topics.

The European Union passed monumental privacy legislation in 2018 with the General Data Protection Regulation (GDPR). The legislation includes obligations that guarantee privacy rights for individuals and that require companies to receive consent before collecting user data.

Biden, in an interview last year with the editorial board of The New York Times, voiced support for similar legislation in the United States.

“We should be setting standards not unlike the Europeans are doing relative to privacy,” he said.

But members of the Trump administration were not so keen on similar legislation.

In June, Rob Strayer, deputy U.S. assistant secretary of state for cyber and information policy, attacked the law for its “overly restrictive” rules.

“We do have serious concerns about (GDPR’s) overly restrictive implications for public safety and law enforcement,” he told Politico. “We definitely find that divergent interpretations (of the law) are also an issue, chilling some of the commerce that could be taking place.”

While President Trump’s stance on enacting similar legislation in the United States remains unclear, he has repealed internet privacy protections created under the Democratic Obama administration during his first year in office, Reuters reported in 2017.

“We should be setting standards not unlike the Europeans are doing relative to privacy.”

The protections required internet service providers to obtain consent from customers before using personal data for advertising and marketing.

In another move across the Atlantic, a decision by the European Court of Justice (ECJ) in July created uncertainty about companies transferring personal data from the United Kingdom to the U.S.

The decision, also known as the Schrems II ruling, invalidated the Privacy Shield framework, designed to provide companies with a mechanism to comply with data-protection requirements in transatlantic trade.

“To address the challenges posed by the Schrems II ruling, the Trump administration is exploring all options at its disposal and remains committed to working with the European Commission to negotiate a solution that satisfies the ECJ’s requirements while protecting the interests of the United States,” U.S. Deputy Assistant Secretary for Services James Sullivan said in a Commerce Department letter on the ruling.

AAF’s Huddleston told Digital Privacy News that each candidate most likely had distinct approaches regarding whether to enact any European-style privacy legislation in the U.S. in the future.

Both parties have discussed whether the California Consumer Privacy Act (CCPA), which took effect in July, should serve as a minimum federal standard, she said.

“The idea that the federal laws should be the minimum, and that the states should be able to pass additional regulations if they need to, has been favored more by the Democrats,” Huddleston said. “Whereas the Republicans have recognized that this potential patchwork is incredibly disruptive.”

The GOP, she explained, leans toward a preemptive standard to supersede state laws.

In June 2018, California Gov. Jerry Brown signed the California Consumer Privacy Act (CCPA), which provides users with more control over personal information collected by businesses — including the right to delete and opt-out of the collection of their data.

“We do have serious concerns about (GDPR’s) overly restrictive implications for public safety and law enforcement.”

Enforcement of the legislation began this past July as the first consumer privacy law in the U.S.

Neither Trump nor Biden has specified in their policy platforms if similar legislation should be passed nationwide.

Trump and Biden also have not called for a breakup of Big Tech companies, but both have called for increased regulation — as Facebook, Google, Amazon, Apple and other companies have faced increased scrutiny in recent years.

Barr called the case “monumental” for the agency and for American consumers, stating a lack of competition led to less innovation and harmed users, advertisers and small businesses.

“This lawsuit strikes at the heart of Google’s grip over the internet for millions of American consumers, advertisers, small businesses and entrepreneurs beholden to an unlawful monopolist,” Barr said.

It remained unclear if a Biden administration would pursue the lawsuit if elected to the White House.

The Google antitrust lawsuit “strikes at the heart of Google’s grip over the internet for millions of American consumers, advertisers, small businesses and entrepreneurs beholden to an unlawful monopolist.”

However, The Wall Street Journal reported earlier this month that Biden said that “growing economic concentration and monopoly power in our nation today threatens our American values of competition, choice and shared prosperity.

“Our commitment to these values must compel us to do far more to ensure that excessive market power anywhere — across industries, from health care to agriculture to tech to banking and finance — is not hurting America’s families and workers,” Biden said.

In addition, Matt Hill, a Biden campaign spokesman, recently declined to convey to the Journal Biden’s stance on settling antitrust cases but pledged that he “would be tough.”

“Joe Biden has long said one of the greatest sins is the abuse of power,” Hill said. “Many technology giants and their executives have not only abused their power, but misled the American people, damaged our democracy and evaded any form of responsibility.

“That ends with a President Biden.”

Biden also did not join other Democratic presidential candidates in calling for breaking up big tech during the primaries, though he had said previously that doing so without a formal investigation was premature, the Journal reports.

Biden confirmed this when talking to the Times last year, telling the editorial board that not everyone in the tech industry was a “bad guy,” but that some actions required regulation.

However, Biden’s choice of California Sen. Kamala Harris, long a Silicon Valley supporter, as his running mate has raised questions on how his administration might regulate big tech.

“We do continue to see a lot of calls for regulation around big tech,” AAF’s Huddleston said.

“But what’s interesting is that many regulations that are proposed, including around privacy, could actually make it more difficult on new entrants to challenge Big Tech and (allow) more competition to emerge rather than making it a more competitive landscape.”

The presidential candidates have slightly differing stances on Section 230 of the Communications Decency Act, which focuses on how speech is regulated on the internet.

Biden has called for revoking Section 230, while Trump has supported amending it.

“Our commitment to these values must compel us to do far more to ensure that excessive market power anywhere … is not hurting America’s families and workers.”

Democratic candidate Biden, according to The Wall Street Journal.

The order calls for a clarification on Section 230, stating: “We cannot allow a limited number of online platforms to hand-pick the speech that Americans may access and convey on the internet.”

The president also has taken a strong stance against Chinese-owned social media platforms operating in the U.S., including TikTok and WeChat — signing orders that would bar the apps from being downloaded in U.S. app stores, if not banning them altogether.

Biden has said that Section 230 of the Communications Decency Act should be revoked.

“There is no editorial impact at all on Facebook. None. None whatsoever,” he told the Times last year. “It’s irresponsible. It’s totally irresponsible.”

In the same interview, Biden said he had never been a fan of Facebook and described CEO Mark Zuckerberg as a “real problem.”

“I’ve been in the view that not only should we be worrying about the concentration of power, we should be worried about the lack of privacy and them (Facebook) being exempt,” he told the editorial board.

AAF’s Huddleston told Digital Privacy News that each candidate had different reasons for their positions on Section 230.

Trump and other congressional Republicans have argued that conservative voices are being silenced, while Democrats are focused on ending hate speech and misinformation.

“While we’re seeing conversations and criticisms of Section 230 from both the left and the right, they’re coming at it from not only completely opposite angles, but from completely incompatible angles as well,” she said.

Neither candidate has expressed a strong stance on encryption.

Trump’s only record on the issue is when the administration criticized Apple earlier this year for not unlocking the cellphones of criminal suspects, Reuters reported.

Biden’s position on encryption is unclear.

Regardless of the results of the election, Huddleston said she hoped data privacy became an issue for the federal government.

The United States has had a “light-touch” regulatory policy that is favored by Trump — and she said expected federal guidelines to remain intact if he was reelected.

If Biden finds himself in the White House, Huddleston said she saw a greater willingness to adopt a European approach that would create a more regulatory regime.

Rachel Looker is a writer based in Washington, D.C.