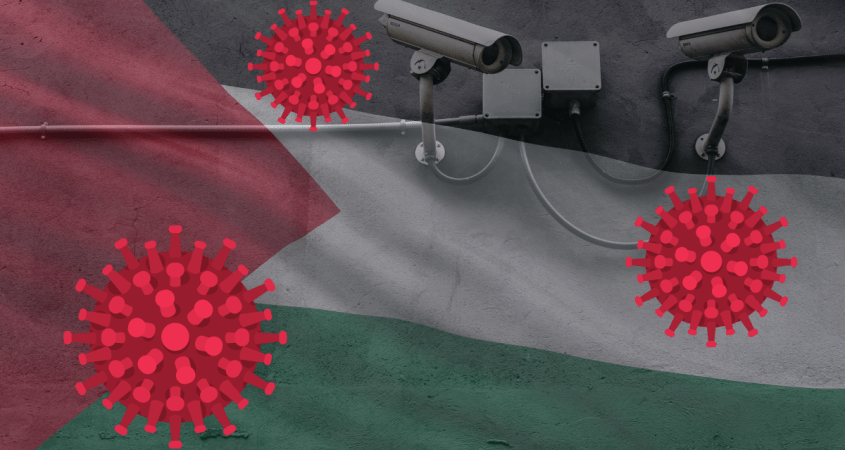 Palestinian Authority President Mahmoud Abbas issued a presidential decree on March 5 “declaring a state of emergency in all Palestinian territories to confront the coronavirus and prevent its spread,” said Nadim Nashif, executive director of the Arab Center for the Advancement of Social Media (7amleh).

“Since then,” Nashif said, “civil-society institutions have documented violations of freedom of opinion and expression and digital rights.”

Abbas’ decree is now the State of Emergency Law, which since has been extended in 30-day increments. The law imposes fines of $2,000 to $7,000 and a year in prison for violators.

It specifically targets digital rights and privacy, the group said.

“Health fears are being used to legitimize technologies of surveillance and less privacy for people.”

Nadim Nashif, Arab Center for the Advancement of Social Media.

But Palestinian Prime Minister Mohammad Shtayyeh told reporters in March that the fundamental rights of citizens would be respected under all circumstances.

The law, however, bars the spreading of “news related to the state of emergency that (is) not based on an official source.”

Nashif’s group said social media was popular in the Palestinian territories, where movement is restricted by Israeli authorities — along with audio, print and broadcast media.

Further, the PA law specifies that “whoever commits any crime against public order, civil peace and stability during the state of emergency shall be punished with the maximum penalty prescribed by the law.”

The Arab Center argued the provision “can be used extensively to restrict and criminalize digital content.”

Nashif told Digital Privacy News: “There have been more restrictions on freedom of expression online during the time of the pandemic.

“Health fears are being used to legitimize technologies of surveillance and less privacy for people.

“The state of emergency will not be used for any other matters outside its declared goals.”

“The main violations are the use of emergency laws and jailing people who are criticizing the authority, and how to deal with fake news,” Nashif continued.

“Some people who published unauthorized or unchecked news were questioned and threatened.”

Since the state of emergency was declared, rights groups have documented violations of expression and digital rights.

The Palestinian Center for Development and Media Freedom in Ramallah documented 31 violations in August, the most recent figures available. Fifteen were carried out by the PA, with the rest by Israel.

Khadr has said he was told that his arrest stemmed from Facebook posts he had written criticizing Abbas’ handling of a recent strike by doctors and nurses who sought raises and benefits.

Security forces also arrested Amid Masoud, a family doctor, from his clinic at the Huwara checkpoint, south of Nablus, that same day — also regarding Facebook posts attacking the Palestinian president for the same reason as Khadr, according to the Arab Center.

The emergency law was used to detain the men in both cases, according to both the Arab Center and Amnesty International.

He was arrested after commenting on Ghannam’s Facebook page, expressing his surprise at the closure of mosques due to the coronavirus pandemic, while allowing Easter celebrations to take place.

The Euro-Mediterranean Human Rights Monitor, the Geneva-based nonprofit, condemned the use of the state of emergency to confront the COVID pandemic and to justify what it called “arbitrary detention of activists and social workers, in a clear violation of human rights agreements which Palestine ratified as well as the local laws in the Palestinian territories.

“While the Euro-Med Monitor affirms the necessity for citizens to comply with precautionary measures to prevent the spread of the coronavirus COVID 19, it warns that the detention of Al-Khawaja is against freedom of opinion and expression,” the group said in April.

The Arab Center’s Nashif told Digital Privacy News: “Criminalizing and punishing posts, statements or news on social media related to the state of emergency, by all means, provides more space for restrictions on freedom of opinion, privacy and digital-rights in emergency legislations.

“Any post can be criminalized, as long as it is not premised on an official source,” he added, “regardless of whether it is true or false.”

The Arab Center said it had documented cases where Palestinians’ digital privacy had been violated.

Lists of names and the health data of citizens who have contracted COVID — issued by the Palestinian Ministry of Health — were leaked and circulated on social media —  and the PA allegedly has done very little to protect or compensate those whose digital privacy was violated, the group said.

Accordingly, 7amleh has called on the authority to “issue a law that guarantees the protection of personal and health data, in accordance with international standards and the (constitution), which ensures the protection of the rights to privacy and to access information.”

The organization also urged the PA to hold accountable all those who violated the personal and health data of citizens and to compensate those affected.

Dalia Hatuqa is a writer based in the West Bank.