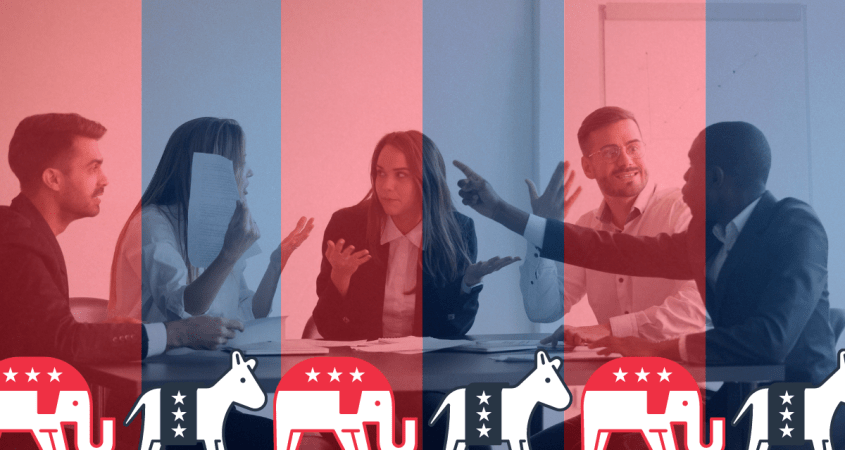 Workplaces are no exception — and employers and employees alike need to be mindful, experts told Digital Privacy News.

“Is there even a reality where we can keep our views private anymore?” asked Roderick Jones, executive chairman at the risk-management firm Concentric Advisors in San Francisco.

“Can you keep your opinions about anything private in a world where machines are producing so much data all the time?”

By putting together 20 or 30 data points on someone, “you’re probably able to get, not just party affiliation, but also more microviews on where they stand on any particular issue,” Jones said.

Not much data is available on how or whether political affiliation affects corporate culture, though anecdotal evidence suggests it does.

Researchers “have only recently become interested in this topic,” Philip Roth, a professor at Clemson University’s business school, told Digital Privacy News. “We don’t know how this type of discrimination influences performance appraisals or promotions.”

“Can you keep your opinions about anything private in a world where machines are producing so much data all the time?”

Harvard University researchers found in a December 2018 study that “ideological misfit” — not sharing the prevailing ideology of a workplace — led many investment professionals in the U.S. private-equity industry to voluntarily leave their jobs over a 10-year period.

And the Society for Human Resource Management’s 2019 Politics at Work survey found that 34% of workers said their workplaces were not inclusive when it came to political perspectives, with 12% having personally experienced political-affiliation bias.

While public workplaces are governed by a set of standards, private-sector employers generally need to use their judgment on how or whether to monitor their staffs.

“It really comes down to the difference between actual, illegal discrimination versus ill-advised practices,” R. Scott Oswald, managing principal of The Employment Law Group in Washington, told Digital Privacy News.

“We don’t know how this type of discrimination influences performance appraisals or promotions.”

For most, a “politics-free work zone” is often a good policy, Oswald said.

“It really is in the employer’s business interest to have such a policy” to avoid allegations of harassment that may arise from political disagreements between coworkers — as well as “lost productivity” from debates in the workplace, he said.

While it’s relatively easy for an employer to keep tabs on workers’ political views and activity, “the ability to look all this stuff up and whether it’s advisable are two different things,” Oswald said.

“It really comes down to the difference between actual, illegal discrimination versus ill-advised practices.”

He recommended that companies “bifurcate” the hiring process, so that recruiters doing background checks on job candidates were not the ones making hiring decisions.

That way, Oswald said, the hiring manager is not aware of a candidate’s politics.

“It’s not a good look to be getting in the way of people’s personal politics,” he said.

Ndjatou’s advice for workers, particularly those working from home during the pandemic, is to “guard your online presence as best you can,” even beyond social media.

“It’s not a good look to be getting in the way of people’s personal politics.”

“Be very careful about using your business accounts or emails for political thoughts,” he said. “Your employer has the right to that information.”

Jones, of Concentric Advisors, observed: “It’s almost like every employee has to think about being a CEO, because that’s sort of what everyone is.”

“People are fired up on all sides,” he told Digital Privacy News. “It’s getting harder and harder to keep work at work and home at home.”

“It’s getting harder and harder to keep work at work and home at home.”

The next few months, in particular, will be “a challenging time for employers” as people process the results of the election, said Jones.

“Depending on which way the result goes, you’re going to have people in your organization not happy,” he said. “It’s going to be quite traumatic, actually, one way or the other.”