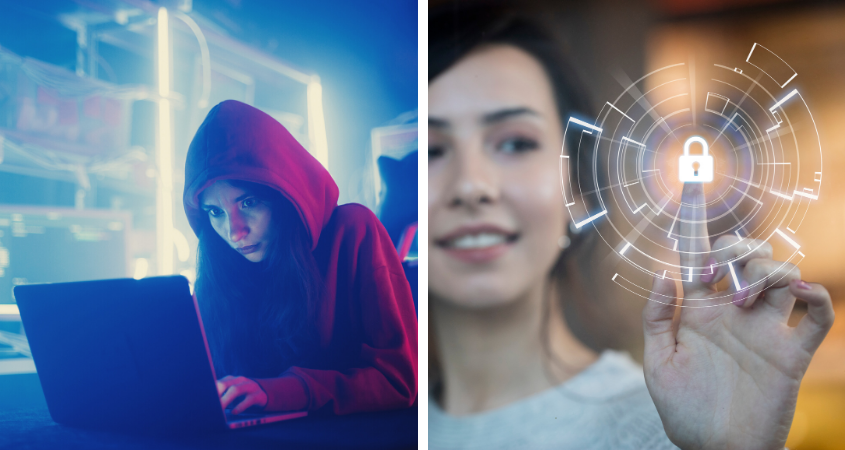 When Lasya Sreenivasan applied to high school in 2016 in Phoenix, Ariz., she was reticent to go into computer science.

Both parents worked in the field, and, said Sreenivasan, “I had this idea from what I saw in movies that computer scientists worked on their laptops all day, typing random things.”

Sreenivasan, 17, didn’t see how that job incorporated her interests in psychology, linguistics, and history.

But, after a two-week summer course, Sreenivasan was intrigued and decided to give computer science a try. She enrolled in the Center for Research Engineering Science and Technology (CREST) program at Paradise Valley High School.

Few girls enrolled in computer science, so when Sreenivasan saw another girl in her freshman class, they immediately became friends.

The lack of girls in her computer science classes can be isolating. It’s also motivating.

“There’s a mindset that was ingrained in me from everything I’ve heard of the lack of women in computer science,” Sreenivasan, now a Paradise Valley senior, told Digital Privacy News. “I have to work 10 times as hard as the guys to be considered serious.”

But Sreenivasan is not alone in her experience.

“I have to work 10 times as hard as the guys to be considered serious.”

Kaitlyn Carroll, junior in computer science at Tennessee Tech University in Cookeville, Tenn., about 80 miles east of Nashville, also finds herself one of a few women studying computer science.

Typically, said Carroll, a class of 30 students will as few as five women.

“It was a little jarring at first,” she told Digital Privacy News, “to see men everywhere — and across the room you see one other woman — but I think I’ve gotten used to it now.”

There is an idea that women shouldn’t worry about privacy, said Renee Bovelle, an ophthalmologist in Glenn Dale, Md., near Washington, who also teaches other doctors about cybersecurity.

She, too, has found a lack of gender diversity in the field.

“Well,” Bovelle said, “we have to worry our pretty little brains about it because it affects us directly.”

In her field, women may be managing the health care of a family, so women have to have awareness of privacy issues.

A lack of women in the field “is a threat to the cybersecurity workforce.”

Sreenivasan, Carroll and Bovelle’s experiences reflect the underrepresentation of women in cybersecurity careers.

Having an underrepresentation of women, said Lynn Dohm, executive director of Women in CyberSecurity (WiCyS), “is a threat to the cybersecurity workforce.”

Keeping Ahead of Adversaries

Eman El-Sheikh, director of the Center for Cybersecurity at the University of West Florida (UWF) in Pensacola, wants to advance women in cybersecurity because the field needs innovation to keep ahead of adversaries.

“The threat landscape continues to evolve daily,” said El-Sheikh, “and women will play a critical role in advancing cybersecurity through their diversity of thought, perspective — and through the knowledge and skills that they bring to the table.”

Especially now, with new privacy threats every day, said Dohm, “our community is needed now more than ever.”

Men and women come at problem-solving differently, Bovelle told Digital Privacy News, and “you have to have diversity of thought, because the criminals do.”

Cybersecurity, for instance, was intriguing to Sreenivasan because it incorporates so many of her interests.

“I always wanted to be a spy,” the Paradise Valley senior said, “and cybersecurity is the tech version of that.”

Carroll, the Tennessee Tech junior, was attracted to cybersecurity because the work is so necessary.

Bovelle returned to school to earn a master’s in cybersecurity after realizing how little she knew about a topic that had a huge impact on her medical practice.

“You have to have diversity of thought, because the criminals do.”

She said she continued to teach doctors about privacy issues because she wanted others to have the same knowledge and understanding she does.

UWF’s El-Sheikh said women joined cybersecurity because they wanted to help others. That’s what cybersecurity is all about, she said. “Women want the opportunity to help and make an impact.”

The focus on attracting more women to privacy and cybersecurity work isn’t about benefiting women, Bovelle said. It’s not about doing women a favor, she said.

“We need women to benefit this arena.”

Once women get into cybersecurity work, evidence shows that they do well.

According to the Cybersecurity Workforce Study, 52% of women in cybersecurity have post-graduate degrees, versus 44% of men.

And, proportionately, more women are serving in leadership positions compared to men.

Cybersecurity work is appealing — and women do well in the field — so the challenge is creating pipelines to recruit and retain women.

High school and college organizations are bringing women together around privacy and cybersecurity.

During Sreenivasan’s time with CREST, she has been part of Paradise Valley’s Women in Information Technology (WIT) program.

The national WIT program, based in Boulder, Colo., includes internships, competitions and opportunities in various aspects of computer science, including cybersecurity.

“Women may not feel like they’re up to par, even though they are.”

The program has helped Sreenivasan connect with more women in computer science — and it stoked a love of cybersecurity in particular.

At Tennessee Tech, Carroll is part of the WiCyS campus chapter. The organization provides an opportunity to talk about what it feels like to be underrepresented in the field, Carroll said, and is a chance to practice technical skills.

“In this field, women may not feel like they’re up to par,” she told Digital Privacy News, “even though they are.”

At West Florida, a Cybersecurity Ambassadors program identifies diverse students to serve as ambassadors to visit schools to encourage an interest in cybersecurity.

In partnership with the Girl Scouts, the university also offers a summer camp to encourage girls to learn more about cybersecurity.

The image of who works in cybersecurity, and how many women are in the field, are barriers to recruiting women right now, professionals told Digital Privacy News.

“Women will play a critical role in advancing cybersecurity through their diversity of thought, perspective.”

It’s an “untrue myth and stereotype associated with cybersecurity that it’s a hacker in a hoodie in his basement,” said West Florida’s El-Sheikh. However, that misperception negatively affects girls’ interest in cybersecurity.

Women are in leadership in cybersecurity, but they aren’t visible. “I don’t think the general public sees all the women in computer science,” Sreenivasan said.

Bringing women who are in the profession to speak with and mentor younger women is a part of WIT, WiCyS and the Cybersecurity Ambassadors programs.

Hearing from professional women in cybersecurity is a powerful part of the program, said Jeffrey Billings, IT director with Paradise Valley Schools.

For El-Sheikh, however, that comes down to more women being ambassadors.

“If the ambassadors are males, then the girls won’t see themselves in the mentors,” El-Sheikh said.

“This is for everybody,” she told Digital Privacy News. “We are on our way, but we’re not there yet.”

Samantha Cleaver is an education writer in Charlotte, N.C.