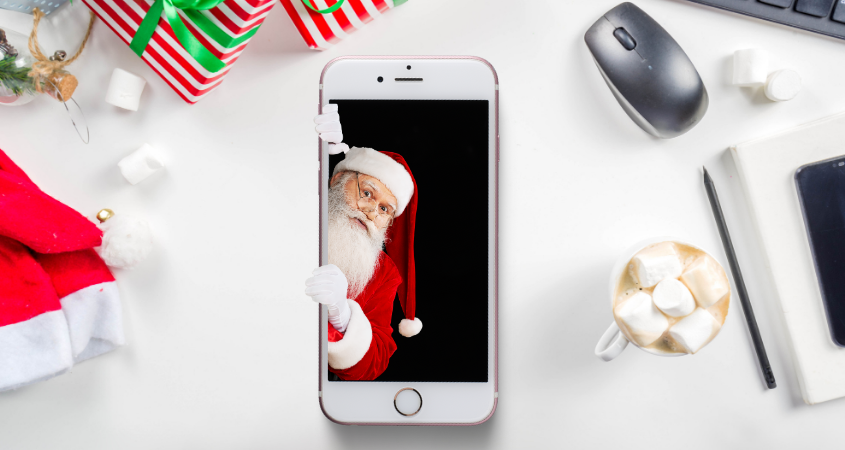 Santa’s the worst, at least when it comes to privacy.

He knows when you’ve been sleeping.

He knows when you’re awake.

So, it shouldn’t come as a surprise that many of his digital elves take their cues from their boss: If you use popular gift-giving apps, chances are good that your wish list will draw eager attention from retailers hoping to reap “add-to-cart” clicks.

Shelby Fiegel didn’t think much about privacy issues when she took a co-worker’s recommendation to use an app for managing the secret Santa gift exchange for her team at the University of Central Arkansas, where she is director of outreach and community engagement for the Center for Community and Economic Development.

So far, the app is an efficient alternative to a spreadsheet and to drawing names to match givers and recipients, Fiegel told Digital Privacy News, but she also hopes she hasn’t touched off an unwanted long-term relationship with a clingy elf.

“I’ll be interested to see if anything else pops up in my inbox after the holiday season.”

“Knowing that they had those options makes me feel a little better, but I’ll be interested to see if anything else pops up in my inbox after the holiday season,” she said.

“I’ll be interested to see if we receive any other marketing from them. I hope not.”

The whole point of digital, shareable gift-list tools is to let people know what you want — but, even so, people try to contain the privacy fallout, said Paula Marrero, founder of Marrero Events, an event-planning service and online gift shop in Danvers, Mass.

Years of wrangling brides, grooms and their parents have taught Marrero about how much privacy people are willing to forfeit to boost the chances that they’ll receive what they actually want.

“My clients are busy — and they just want something that’s efficient and safe. I tell them registries are a necessary evil.”

Everybody, she said, understands the tradeoff: When you put your list out there, you set yourself up as a highly coveted target for marketers.

From there, the tug-of-war is between privacy-protecting recipients and the marketers who want to make sure their goods are on givers’ radar.

“My clients are busy — and they just want something that’s efficient and safe,” Marrero told Digital Privacy News. “I tell them registries are a necessary evil.

“They’ll tell me that they’ve signed up and now they’re getting ads for baby things — and they’re not even married yet.”

How One App Does It

As founder and CEO of Elfster, a popular secret Santa management app, Peter Imburg spends his days on the tightrope between consumer expectation and retailers’ goals.

He started the service in Oakland, Calif., in 2004 after seeing his sister and wife taming a family gift exchange. Now, Elfster has 15 employees and more than 17 million users.

“Your wish list is a living thing. You can clean it up and start over.”

Elfster’s gift lists are offered through major retailers, which pay the firm for links that bring in sales. Transactions are handled by the retailers, who subsequently manage relationships based on their own security and privacy protocols, Imburg said.

But Elfster claims to have a short memory.

“Your wish list is a living thing,” Imburg told Digital Privacy News. “You can clean it up and start over.”

Hidden digital “breadcrumbs” can serve up clues to your shopping intentions, especially if your wish list is tied to an identifiable event, like Christmas, said James Martinez, founder of All Things Digital, a marketing consultancy based in Coram, N.Y.

“If the registry site currently runs any sort of remarketing pixels, then that information can be used to market by themselves — or they are even able to share their remarketing ‘cookied’ visitor audience with third-party sites and vendors,” he told Digital Privacy News.

“If someone registers for a wedding registry on a large marketplace, they’re certain to shop for typical bridal products on that platform,” Martinez added. “Now, they’re tagged via the marketplaces’ remarketing pixels.”

Once you’ve put yourself in a certain audience, you’re in the bullseye for marketers targeting such people, he explained.

“Once the bride-to-be clicks on any of these ads on YouTube, Google or Facebook, all bets are off.”

“The email and or snail-mail data may not be sold, but the tagged audience can,” Martinez said. “And once the bride-to-be clicks on any of these ads on YouTube, Google or Facebook, all bets are off — and she should prepare for the onslaught of bride-to-be offers.”

But some narrowly focused holiday apps grant cheer-spreading power only to individuals using the app.

JacquieLawson.com is a U.K.-based company that sells annual subscriptions to its animated digital greeting cards. Its digital Advent calendar, available in desktop and app versions, costs $5 and is designed to be shared — but recipients must opt in to join the company’s email list, according to staffers.

“We provide your recipients with the ability to send you a ‘thank you’ reply,” the company told Digital Privacy News in an email. “If your recipients choose this feature, we explicitly state the following: ‘We will not use your email address for any purpose other than to send this response note.’”

People setting up gift lists know that they’ve literally put a price on privacy, said Marrero, the Massachusetts event planner, but they’re surprised at the invasion of opinions as well as ads.

“The stress of a wedding doesn’t come from the wedding,” she told Digital Privacy News. “It comes from the unsolicited opinions.

“Wish lists give cousins, aunts, older sisters a look at your life.”

Joanne Cleaver is a business writer based in Charlotte, N.C.