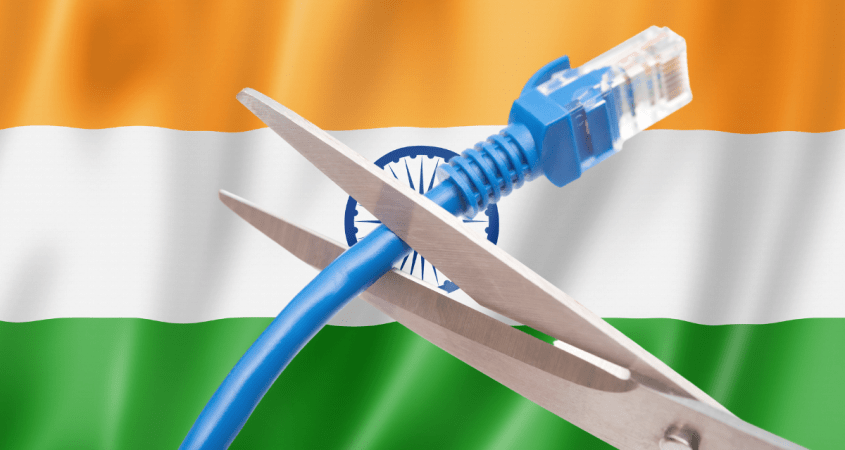 “Turning off internet access is a drastic decision that hurts the state’s own ability to communicate with their people,” said Rachel Vrabec, a privacy researcher and founder of the privacy start-up Kanary.

“However, they justify these actions in order to prevent ‘rumors from spreading and causing violence.’

“This directs people’s attention away from their phone screen and to other slower channels like television, print or rallies — so the state can push out corrective messaging.”

“Turning off internet access is a drastic decision that hurts the state’s own ability to communicate with their people.”

But India Prime Minister Narendra Modi’s government has argued that citizens have no basic right to the internet for any purpose and that shutting down online service protects the country from terrorism, combats “fake news” and helps in “keeping the peace.”

Regarding whether the shutdowns jeopardized public safety during the COVID crisis, Modi officials also have argued that the outages were needed to preserve human life and that — so far — “no one had died.”

Last year, 33 countries worldwide have reported 213 internet shutdowns, based on reports from news organizations, advocacy groups and the website Internetshutdown.in, which tracks outages across India alone. These shutdowns have spanned more than 1,706 days.

But 121 of the shutdowns were recorded in these major states in India: Jammu, Kashmir, Rajasthan, Uttar Pradesh and West Bengal.

According to Internetshutdown, Jammu and Kashmir alone have faced 180 internet shutdowns between 2012 and last year, including 55 this year through October.

India is the world’s largest democracy — and the shutdowns in the Kashmir region alone have affected as many as 60 million people, about the size of France.

Reports from global websites and organizations that track internet shutdowns suggested the disruptions began around 2012 in Jammu and Kashmir.

“How do I cut off communications between the terrorists and their masters on the one hand but keep the internet open for other people?”

Between Jan. 25 and March 4 of this year, 2G internet services were intermittently restored by Modi’s government, but it only allowed “whitelisted” websites — those approved by the government — to be accessed.

No social media sites were included.

However, after several citizen protests and legal petitions filed by activists with the Supreme Court of India, the justices ruled that it was illegal to impose an “indefinite shutdown of the internet in the Muslim-majority region.”

This forced the Jammu-Kashmir government to resume 2G services in eight of 10 districts in Kashmir.

But 4G services still have not been resumed, as the government continues to say that restrictions on high-speed internet are “absolutely necessary in the interest of the sovereignty and integrity of India.”

The Modi government also has argued that the protection of India’s sovereignty and integrity, as well as the overall security of the country, warranted the shutdowns.

“How do I cut off communications between the terrorists and their masters on the one hand but keep the internet open for other people?” External Affairs Minister Subrahmanyam Jaishankar asked in a Politico Europe interview last year.

He described the shutdowns as “impediments.”

Advocates long have contended that the shutdowns were ordered to control the flow of information and minimize any possible government protests, advocates said.

“Governments understand that the internet creates the opportunity for people to access news and to spread ideas that are in direct opposition to the official narrative promulgated by the state,” said Ray Walsh, digital privacy expert at the global ProPrivacy.com site.

“Internet shutdowns are an immediate and effective relief from this unwanted information spread, usually enforced during times of upheaval.”

“Governments understand that the internet creates the opportunity for people to access news and to spread ideas that are in direct opposition to the official narrative.”

“Peace is more important than a little inconvenience to you and me.”

But critics disagreed on how the blackouts affected India’s ability to respond to the coronavirus pandemic. According to Johns Hopkins University in Baltimore, India reported 9,796,769 cases on Friday, as 29,398 new cases were registered during the past 24 hours.

In May, Modi’s government ordered a three-day internet shutdown — and the move impeded the effectiveness of the Aarogya Setu contact-tracing app, which was launched with great fanfare during the outage.

“The Aarogya Setu app … has become defunct for 255,000 users in the valley due to the internet shutdown,” reported The Greater Kashmir regional newspaper that month.

“Peace is more important than a little inconvenience to you and me.”

In addition, an official of the Indian Health Department told Reuters: “It was impossible to trace the contacts of COVID-positive cases in those three days, as there was no way of reaching out to people.

“For instance, journalists, activists, human-rights defenders and others are forced to rely on phone calls and SMS to do their work during an internet shutdown,” she continued. “These systems are often insecure — and in some contexts — heavily monitored by law enforcement and government agencies.

“The privacy implications, especially for these groups are relatively high.”

In 2016, the United Nations Human Rights Council adopted a resolution that “condemns unequivocally measures to intentionally prevent or disrupt access to or dissemination of information online in violation of international human rights law.”

“During an internet shutdown, people rely on SMS text, phone calls and other insecure methods to access information.”

Reports by AccessNow and the Digital Empowerment Foundation (DEF), based in India also have condemned Modi’s government for the shutdowns — noting that they violate the United Nations covenants.

“Shutdowns exclude entire communities from fully participating in social, political, and economic self-determination,” the foundation said in a 2018 report.

“Disruptions that take place in underdeveloped areas like the North-East, Odisha and Bihar are sure to adversely affect the state’s plans for development and residents’ attempts to build better lives,” it concluded.