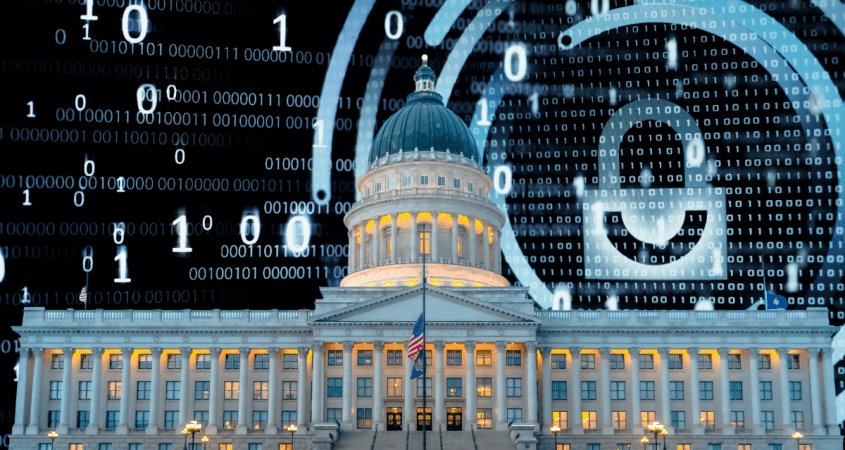 The Utah House of Representatives passed a bill last week to regulate the use of surveillance and data-collection technology by government entities or their contractors.

If signed by Republican Gov. Spencer Fox, the legislation would establish two personal privacy officer positions, one appointed by Fox and the other by State Auditor John Dougall, also a Republican, as well as a privacy oversight commission.

The bill, sponsored by House Majority Leader Frank Gibson, R-Mapleton, may be the first of its kind in the nation.

The House passed the legislation March 4 on a unanimous procedural vote after the Utah Senate approved it earlier in the day.

According to the bill, known as H.B. 243, any Utah governmental agency, whether on the state or local level, that uses technology for personal data-collection or contracts with a company to do so is subject to privacy testing, Gibson told Digital Privacy News.

If personal identifying information is at risk or a contract with an outside vendor doesn’t maintain the safety of the information, the contract would be terminated or rectified.

“We live in a world currently where information is king,” Gibson said. “And unfortunately, our personal, private identifying data or information gets into the hands of the wrong people.”

Cameras are tracking where people are going — and social media sites are being trolled to see what individuals are saying and doing, he added.

“Our personal, private identifying data or information gets into the hands of the wrong people.”

Although Gibson believes crimes like mass shootings can be prevented when these methods are used in predictive policing, “I worry about the abuse that could happen.”

People shouldn’t be profiled, he said, because of their ethnic background, socioeconomic status or the neighborhood where they live.

“I live in ——- America, where you are innocent until proven guilty,” Gibson told Digital Privacy News.

Marina Lowe, legislative and policy council with the American Civil Liberties Union of Utah, said the legislation was a response to government entities entering into contracts that used the technology in the name of solving crimes.

If the bill becomes law, it would provide “a mechanism so these sorts of engagements with technology companies can be halted,” she said.

The legislation also would “provide an opportunity for a thorough, deep dive — specifically looking at how privacy has been violated or is likely to be violated — and how that technology can be used moving forward,” Lowe said.

In the summer of 2019, Utah contracted with Banjo, a tech surveillance company in Park City, to gather huge amounts of data from multiple sources — including surveillance cameras, 911 calls and social media sites.

But Lowe told Digital Privacy News: “A lot of people had concerns about what Banjo would do — and there really wasn’t an opportunity for the public to weigh in or feel like their rights were being protected.”

Last April, GOP State Attorney Sean Reyes said the state had suspended Banjo’s services after news reports that the company’s founder, Damien Patton, had connections to a white supremacy group as a teen and was involved in a shooting at a synagogue at the time.

Reyes also pledged to implement a third-party audit and a committee to address issues like data privacy and possible bias.

The bill would “provide an opportunity for a thorough, deep dive — specifically looking at how privacy has been violated or is likely to be violated.”

“This is sort of the unicorn bill,” Gibson said. “The only people who aren’t on board are the state agencies — the ones I’m trying to protect citizens from.

“It’s meant to be disruptive,” the seven-term representative continued. “If the everyday citizen is going to give you information on themselves, for whatever service it may be, then it’s incumbent upon you to make sure you maintain that privacy.”

Hayley Tsukayama, legislative activist for the Electronic Frontier Foundation, told Digital Privacy News that she had not personally seen another state bill exactly like H.B. 243 — but that across the country, “there is a sort of growing interest in having a dedicated privacy regulator or agency.

“I definitely applaud the effort and the thought that goes into setting up a dedicated person, a dedicated committee.”

Regarding Utah’s legislation, “I like that they have given clearly good thought to the makeup of the committee,” Tsukayama said.

She does have concerns, however, about whether governmental agencies have enough staff to handle privacy regulation, particularly in smaller states.

“At EFF, we are pretty agnostic about where regulation falls in privacy protections and violations,” Tsukayama told Digital Privacy News. “We just want to make sure that there is enough bandwidth.”

After lawmakers approved CCPA, the state attorney general’s office said it lacked the staffing to enforce it. Prop 24 established of a state privacy-protection agency.

“Prop 24 does not empower consumers to sue businesses that violate their privacy rights,” the report said. “Without effective enforcement, a law is just a piece of paper.”

Generally, Tsukayama said, EFF supports consumers suing companies that violate their privacy without having to go through an intermediary.

“I like that they have given clearly good thought to the makeup of the committee.”

However, that state lawmakers across the country are discussing data privacy is encouraging, Tsukayama noted.

A similar bill was introduced in the Utah Senate, but it failed last week.

“Constituents are letting their legislators know that they are not comfortable with the way privacy is in this country and that they would like to see more focus and attention given to it.”

Mary Pieper is an Iowa writer.

The governor would name:

The state auditor would appoint:

The attorney general would select: