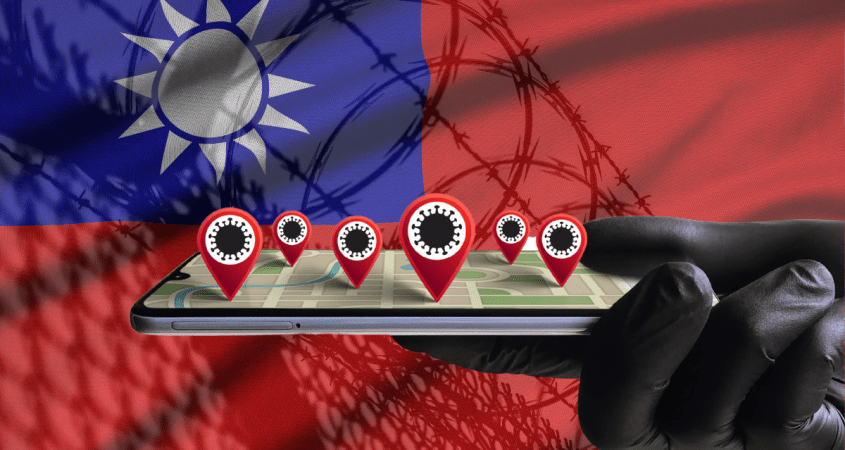 Privacy advocates in Taiwan are outraged over the government’s expansion of its “electronic fence” program to fight COVID-19, saying that it is open-ended and of questionable legality.

“There’s no transparency about the deployment of measures formerly used only by law-enforcement agencies when undertaking criminal investigations,” he said.

The government expanded the program at the end of December.

The reference to the artificial-intelligence antagonist in the “Terminator” movies was not lost on the public.

According to the Taiwan Centers for Disease Control (TCDC) Electronic Fence 2.0 seeks to “reduce the risk of community transmission.”

It was expanded to “prevent those ordered to conduct ‘self-health management’ (usually for seven days after finishing COVID quarantine) from approaching large-scale gatherings,” the agency said.

TCDC further justified the expansion in its Jan. 6 announcement by pointing out that “crowded large-scale events are characterized by prolonged and close contact with unspecified people.”

But the Taiwan Association for Human Rights (TAHR) hit back the next day, accusing the government of stretching the law. It argued that the policy did not specifically authorize electronic surveillance.

TAHR and Schee both highlighted the lack of sunset provisions or any system for reviewing the necessity for electronic fences.

“When the government invades privacy to prevent epidemics, it should (embrace transparency) and improve legal protections,” TAHR’s statement concluded.

The cities, in northern Taiwan, have a combined population of more than six million people.

“Both a police officer from New Taipei City and Taoyuan’s mayor explicitly said they use the system for proactive contact-tracing,” Schee told Digital Privacy News.

Electronic Fence 2.0 seeks to “reduce the risk of community transmission.”

He added that, in this case of apparent repurposing for virus-related investigations, “oversight is nonexistent.”

Now, multiple local governments are implementing such controls — but “not every city is yet capable of providing public warnings through web-app interfaces,” Schee observed.

Ahead of the Lunar New Year holidays last month, when millions of Taiwanese visit relatives and go sightseeing, Taoyuan Mayor Cheng Wan-tsan announced that data gathered by traffic cameras near 20 scenic spots in the city would be used to issue COVID warnings to reduce the risk of a superspreading event.

The system sent out “yellow warnings” to alert the public that certain spots were getting crowded. The system also could issue “red warnings” that responded to dangerous concentrations of people by closing parking lots and mandated the wearing of masks, even outdoors.

“When the government invades privacy to prevent epidemics, it should (embrace transparency) and improve legal protections.”

“Even though community transmission has almost been wiped out, these measures were an even stronger push down the surveillance path.”

Schee also alleged that Taiwanese officials had not responded to previous complaints he had blogged about the initial electronic fence system.

These include fears that government databases were being linked or merged without proper legal basis and that the system appeared to have no ending date, fearing that data collected during the pandemic would be retained indefinitely.

In its January expansion announcement, TCDC said that only a minimum amount of personal data would be collected — and after “storage for up to 28 days for epidemic investigation and prevention purposes, it must be deleted.”

Still, “no one knows if (the 28-day rule) has been enforced,” Schee told Digital Privacy News.

The system also has been plagued by erroneous reports that individuals in home quarantine had left their dwellings. Several people told not to venture outside under threats of up to $35,881 in fines have reported false positives.

For instance, Apple Daily, the tabloid sister newspaper in Taiwan of Hong Kong’s Apple Daily, reported last April that a local man quarantined after returning from the U.S. was exasperated by abnormal location reports.

He told the tabloid that police had visited his home three times, and had twice used videocalls, within a 10-hour period, to confirm whether he hadn’t left his home.

This also happened last spring to C. Donovan Smith, a U.S. business executive, who quarantined in his Taichung apartment after his business partner tested positive for COVID.

“I was shocked that the police were tracking my personal cellphone without my knowledge. I hadn’t been informed about this.”

“I’d just settled in with a drink and YouTube, when I got a text on my personal cellphone,” he told Digital Privacy News.

“I was shocked that the police were tracking my personal cellphone without my knowledge,” Smith said. “I hadn’t been informed about this.

“I felt quite shaken,” he continued. “Not knowing what else to do, I called the district health official assigned to me.

“She explained that the police were on their way, but it was likely a signal error,” Smith told Digital Privacy News. Soon enough, a policeman arrived. He asked for my ID number and photographed me holding the phone.

“He also said it was probably a signal error.”

Steven Crook is a writer in Taiwan.