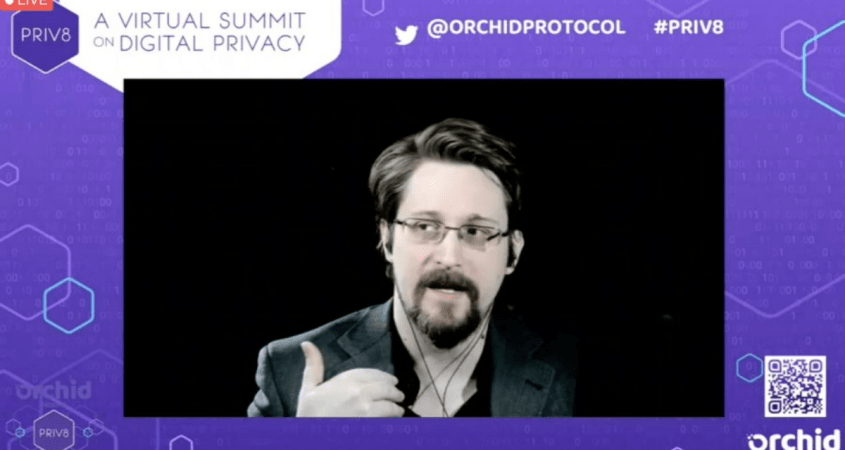 Governments and companies must rethink how they use personal data amid surging consumer demand for better privacy protections, former NSA contractor and whistleblower Edward Snowden and other global digital-privacy experts said this week.

“Privacy is what protects that right of inquiry that leads to progress,” Snowden, 37, who has been living in political asylum in Russia since August 2013, told Tuesday’s opening session of the “Priv8 Virtual Summit on Digital Privacy,” sponsored by Orchid Labs Inc.

“Privacy is the right to self. It allows you to be different and distinct from the majority.”

Snowden keynoted the three-day session. He and other speakers discussed how the needle was beginning to shift towards consumers, who were demanding more privacy-friendly options.

Anne Fauvre-Willis, chief operating officer for Oasis Labs Inc., said the company was seeing a shift in how firms were designing products because users were looking for stronger privacy protections.

Founded in 2018, Oasis Labs is a blockchain startup that provides privacy-friendly cloud-computing platforms that is based in San Francisco.

“One big shift that we’ve seen is a real demand from users,” Fauvre-Willis said during her Tuesday panel. “It’s still the minority, but it’s a growing minority.

“As a result, companies both from the consumer space and in the enterprise space really capitalized on that,” she said.

Fauvre-Willis explained that Oasis Labs and its tools were being used by developers who have created privacy-first technologies.

In one case, the company worked with a genomics company, Nebula, which was born as a privacy-friendly alternative to the popular genetic-testing company 23AndMe.

The genomics company differs in offering its users anonymous testing and giving them control over their own data.

“We have a number of developers on our network that, from the very beginning phases, really focused on being privacy-first — and that’s because that’s what they’re seeing their users want,” Fauvre-Willis said.

On a larger scale, Apple Inc. also has opted for some privacy policy changes in its iOS14 update that offers a “privacy nutrition label” on apps and will require apps to get explicit user permission before tracking their data across apps or websites.

Fauvre-Willis commended Apple’s changes but pointed out that federal privacy standards were needed.

“We have a number of developers on our network that, from the very beginning phases, really focused on being privacy-first.”

“While I applaud Apple for the work that they’ve done to set these new privacy standards, what it indicates to me is a real lack by the federal government to set the right standards,” she told the session.

“I think, particularly in the U.S., there’s really a need right now to set some broad national standard for what consumer privacy looks like — and to really take privacy advocates’ views into perspective when they do that.”

Kevin Werbach, professor of legal studies and business ethics at the Wharton School of the University of Pennsylvania, said on the panel that the pandemic had greatly contributed to the growing debate on best practices related to personal health data when so many countries have offered their own approaches.

One benefit of this debate is that it has raised the level of importance of user privacy, he said.

“The challenge with privacy has often been that people don’t realize what they’re giving up,” Werbach said.

“But with the pandemic, we’ve got issues like contact-tracing, where it involves very serious concerns about health care data that people can readily imagine how things can go wrong.”

Another panelist, Brian Behlendorf, a board member of the Electronic Frontier Federation and the Mozilla Foundation, felt that incorporating government health authorities and other rule-setters would help society avoid repeating the scenario with cookies and other tracking technologies.

“This is where having the government play an active role and understanding these issues and be a peer in these processes is super important,” said Behlendorf, who’s also executive director of Hyperledger at the Linux Foundation.

“The challenge with privacy has often been that people don’t realize what they’re giving up.”

Some governments have started to improve their data-gathering methods for their citizens looking for more privacy-friendly solutions, the panelists said.

“We are starting to see more governments saying we get why this is important and people saying we want something that will give us confidence and trust in using these systems,” Werbach said.

The valid concern on how governments handle healthcare data has led to countries like Taiwan instituting a “participatory self-surveillance” model, Audrey Tang, the country’s digital minister, said during a Wednesday session.

Tang said that this bottom-up approach gave citizens the option to participate in contact-tracing efforts and forced the government to place trust in its citizens, rather than the other way around.

The Taiwanese model isn’t without its concerns related to police check-ins and government tracking, but it attempted to incorporate its citizens in the process.

Similarly, Behlendorf said the idea of “self-sovereign identity,” where users have control over their data in a local wallet, is the right path forward.

“This is where having the government play an active role and understanding these issues and be a peer in these processes is super important.”

“You have to look at how people are looking at designing these things in 2021,” he said in the earlier panel.

“I personally think hanging it around the individual, and giving the individual agency in a world that has robbed them of that in so many different ways, is the best forward-looking path for this.”

Jackson Chen is a writer in Connecticut.