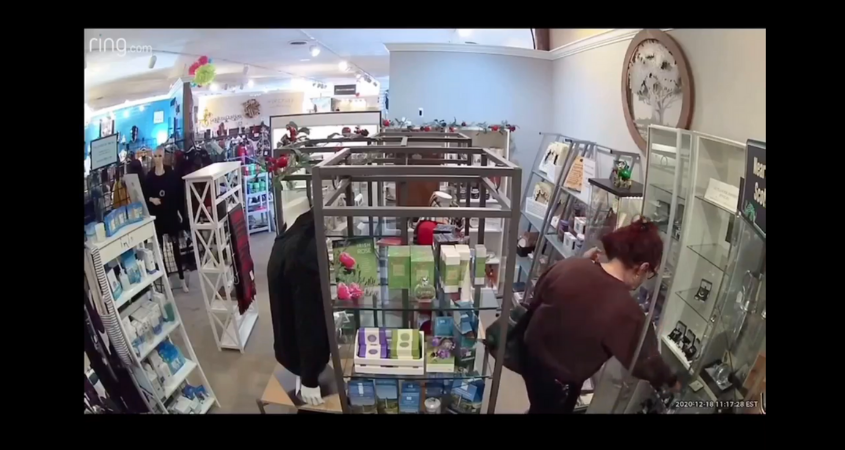 Angie Smith noticed the red-haired woman who meandered into Homestyles Gallery, an accessories and craft mall in suburban Charlotte, N.C., days before Christmas.

But busy with customers, Smith didn’t realize until hours later that the woman had sashayed out with $700 in handcrafted jewelry from an artisan’s booth within the store.

The incident was caught on surveillance tape: The COVID-masked woman glancing around, opening a glass case, sweeping jewelry into a tote bag and trotting off-screen.

“We’ve had small losses before but nothing like this,” Smith, the mall’s co-owner, told Digital Privacy News.

Infuriated at the woman’s brazen theft, she posted a clip of the video to the shop’s Facebook page — touching off a minor storm of citizen detectives determined to help a popular local business recover from a petty crime.

“We have signs posted at the front and around the store.”

Stung by a recession-driven increase in shoplifting, local retailers are on high alert, pressing on with tactics they think will deter theft — regardless of customer privacy concerns.

Smith said that the shop’s notices about surveillance via camera should be fair warning that there’s no such thing as privacy while shopping.

“We have signs posted at the front and around the store,” she told Digital Privacy News. “We don’t hide the cameras.”

“Proving that that person is a shoplifter could be more difficult than you thought, along with (the risk of) or defamation,” said Robert Gellman, a Washington privacy consultant and self-described “privacy curmudgeon.”

“Taking pictures of people who you think were shoplifting and making them public exposes you to a lot of potential liability.”

“People emotionally react much more to video surveillance, compared to digital tracking online, because they see themselves on the screen,” Drako said.

The trauma of the COVID-19 economy has undermined retailers’ financial resources to upgrade surveillance technology — and small retailers often will take theft as more of a personal affront, he said.

A survey by Business.org, based in Salt Lake City, found that 40% of small retailers have seen an increase in theft since the pandemic set in.

The National Association for Shoplifting Prevention in Melville, N.Y., estimates that the 1 in 11 Americans who shoplift take a cumulative $50 billion in goods every year.

“Proving that that person is a shoplifter could be more difficult than you thought.”

But in the COVID era, mask mandates have coincided with household financial distress to ease and excuse more retail theft, according to industry reports.

Meanwhile, retailers realize that they must balance theft mitigation with consumer privacy.

The magazine predicted that retailers were looking for the sweet spot of respecting law-abiding shoppers’ privacy while still thwarting thieves — and predicted that privacy would be integrated into new theft-detecting technologies.

The public has some tolerance for being watched while shopping, he said, but less patience for corporate archives of videos, he added.

“What you do in the mall has always been publicly visible, but now it’s stored and searchable — and that changes how people feel about it,” Drako told Digital Privacy News.

In the absence of federal or, in most cases, state laws on how surveillance tapes may be used or released, small businesses risk more than they realize by digitally publishing even seemingly clear-cut documentation of theft, said Gellman, the D.C. privacy consultant.

But Smith, the North Carolina merchant, has no regrets.

She doesn’t even regret outing the thief on Facebook.

“We were careful to work everything properly as not to get into legal trouble,” she told Digital Privacy News. “We used the word ‘allegedly’ — even though the video clearly showed her shoplifting.

“The video didn’t lie, so we really didn’t see an issue.”

“People emotionally react much more to video surveillance … because they see themselves on the screen.”

Smith recognized her — “she even had the same tote bag,” Smith recalled — and immediately called local police.

Sure enough, the woman had helped herself to more jewelry.

But when Smith confronted her at the door, the alleged thief thrust her well-traveled tote at Smith, ran to her car and drove off.

Smith hasn’t seen her since.

She’s energized, by the outpouring of support, raising awareness of citizens’ power to hold thieves accountable.

“Everyone was incensed for us, because we’re a small business — and our shop is made up of even smaller businesses,” Smith told Digital Privacy News. “But everyone rallied around us by sharing the video.

“It was wonderful that they were supporting us.”