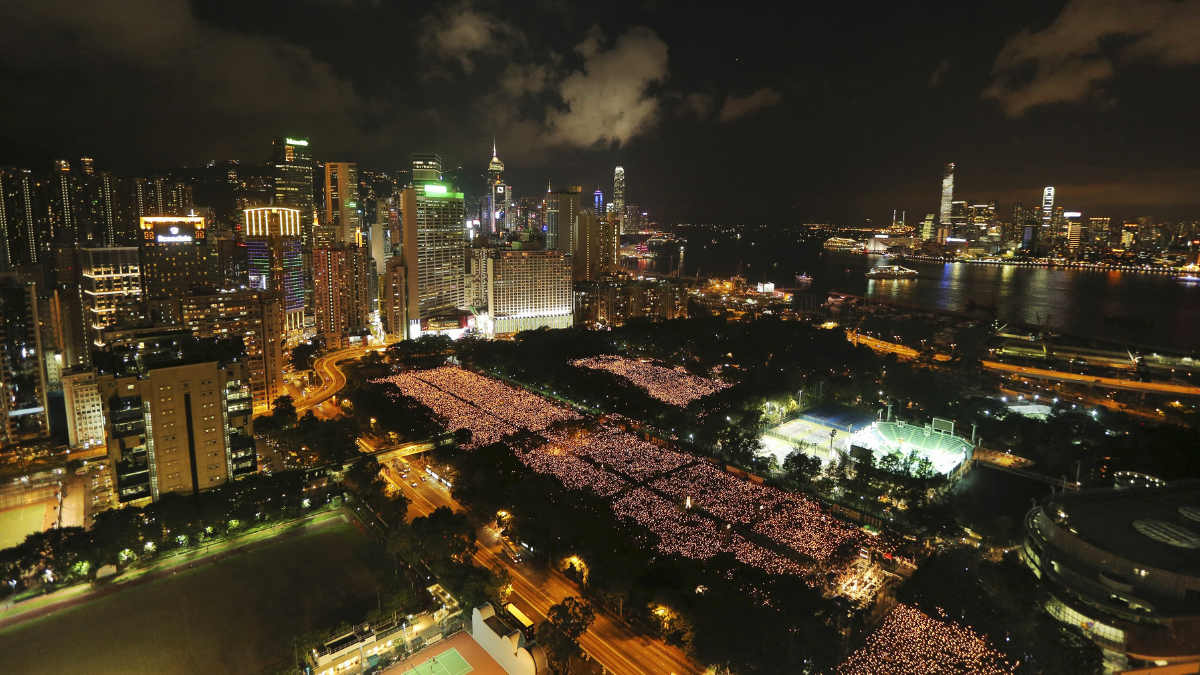 Every year — for more than three decades now — hundreds of thousands of people in Hong Kong have come together on the evening of June 4.

The sorrow-faced citizens are often middle-aged. But countless thousands of young Hongkongers, born long after the killings, also attend.

Over the years, the numbers have grown into the millions — amid, or even despite of, fears that Beijing will not allow the commemoration this year.

Regardless, Hongkongers they come together to remember the slain university students, who had gathered in the square to demonstrate against growing corruption in China and to demand more freedom in their lives.

No one knows for certain how many people the PLA killed after the Chinese Communist Party (CCP) declared martial law to try to quell the protesters.

Some foreign journalists, as well as international diplomats in Beijing, believed the numbers are in the many hundreds — if not thousands.

To this day, the government has never conducted a public investigation — nor has given an official death toll for the Tiananmen Square massacre.

But the people who annually congregate in the vast leafy park named for Great Britain’s 19th century Queen Victoria meet there for another reason, beyond that of honoring Beijing’s murdered students.

Until now, they also gathered to appreciate the fact that they are all still able to enjoy the freedoms that their compatriots on the mainland never had.

The memorials last several hours, often beginning with a traditional moment of silence, to honor the massacre victims.

Afterwards, candles are lit, stirring speeches are made. And patriotic or pro-democracy songs like “Flowers of Freedom” are sung.

In some years, video testimonies are shown.

For example, the Tiananmen Mothers, a small activist faction in Beijing comprising the aging mothers of the victims, recall on videos secretly smuggled out of China their memories of that fateful night 32 years ago.

The widows tell heartbreaking tales of their teenage sons, or daughters, who traveled to Tiananmen Square to peacefully protest — but who never returned.

The Beijing government even has kept the bodies of the children from their parents.

All this is carried out in the searing blast-furnace heat of Hong Kong’s subtropical summers, where both temperature and humidity levels often can climb past 90 degrees.

Despite the often-massive crowds — the largest recorded number was 150,000, to mark the massacre’s 20th anniversary in 2009 — no single report has been made of violence or of troublemakers.

The paradox of these Victoria Park vigils is that, while similar, smaller memorials are held on the same night every year — from London to Paris to Tokyo, New York and San Francisco — Hong Kong is the only place in China where an annual observance is held.

This is because the Beijing government has never allowed any mention of the incident on the mainland.

But now, because of the new national security law, fears are rampant that Beijing never again will allow Hong Kong to hold a memorial to the Tiananmen Square victims.

Last year, claiming the risks of COVID-19 made an assembly too dangerous, the Hong Kong government banned the event.

Despite the decree, some 20,000 defiant Hongkongers turned up anyway. They came in groups no larger than eight — and most were careful to maintain social distancing as much as possible.

Though police turned out in large numbers, they did not interfere, except to film attendees as they approached the park’s entrances, generally as evidence for later prosecutions.

The daring defiance of the Hongkongers who poured into the park last June likely was fueled by news that Beijing had planned to introduce a new security law — specifically written for the city.

Issued at midnight last June 30, the security law has been used to arrest scores of pro-democracy activists.

Among those seized and convicted were 82-year-old attorney Martin Lee — long known as “the Father of Hong Kong democracy” by supporters — and Jimmy Lai, 73, publisher of the popular pro-democracy newspaper Apple Daily.

In 2018, a bipartisan group of U.S. lawmakers nominated him for the Nobel Peace Prize. The following year, the Hong Kong government again imprisoned Wong — and in January, he was among 55 pro-democratic figures jailed under the security law.

Just last Thursday, Wong was sentenced to 10 more months in prison for participating in what the government said was an unauthorized assembly last year to mark anniversary of the Tiananmen Square massacre.

Now, once again, June 4 approaches. And again, the Hong Kong government has forbidden the event to be held — again, citing COVID concerns.

For many, however, this strains credibility, as virtually all the city’s restaurants, hotels and malls have opened. As have Hong Kong’s public swimming pools, libraries, barbershops, parks and beaches.

The event’s organizers, the Hong Kong Alliance in Support of Patriotic Democratic Movements of China, insists that it will host this year’s memorial.

For those afraid to go to Victoria Park, the group urges them to light candles in various locations around the city to mark the occasion.

The CCP now has shut down every means of protesting Beijing’s draconian rule over Hong Kong.

The party now has decreed that Hongkongers can be fired from their jobs, if not arrested, for having the “wrong” slogan on a T-shirt. Or, for writing something “unpatriotic” on social media.

Or, for penning a letter to the editor of a newspaper that could easily be deemed too critical of the government. Or, even for simply holding up a blank sheet of paper in a shopping mall.

‘I Am Not Afraid’

Many people say that if Beijing insists on preventing this year’s Tiananmen Square memorial, it could be the final straw against the Hong Kong people.

Digital Privacy News spoke to several Hong Kong citizens who said they intended to gather for next month’s memorial, despite the very real risks of arrest.

“I am already middle-age,” one man said. “I am only middle-class. I am not rich.

“So, I cannot flee to Canada or America or England, as many rich people here can — and probably will do.

“But I have my self-respect,” he continued. “And I so I want to stand up for myself. And for my family. For my sons.

“If a policeman tells me, he will arrest me for peacefully sitting in a park listening to a speech — or singing, I will say: ‘I dare you. Go ahead. You should be ashamed. I am not afraid.’”

“So, yes, next month we will go to Causeway Bay (Victoria Park),” the man declared.

“And, if a policeman tells me, he will arrest me for peacefully sitting in a park listening to a speech — or singing, I will say: ‘I dare you. Go ahead. You should be ashamed. I am not afraid.’”