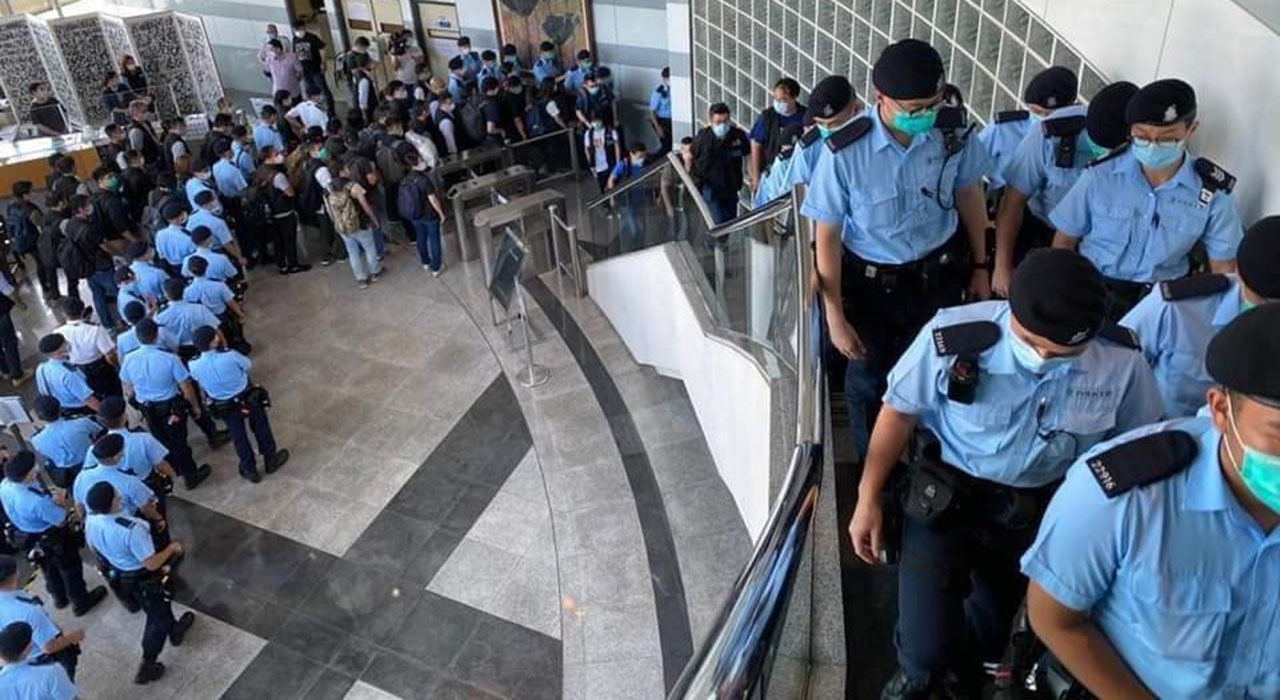 China claimed it only created the law to punish serious crimes: acts of secession, subversion, terrorism — and collusion with a foreign power.

Thus, Chinese Vice Premier Han Zhang said in May that the law would only target a “small group of people.”

But since last summer, well before the law was activated, more than 9,000 Hongkongers, 40% of them schoolchildren, have been arrested.

They have been charged for knowingly taking part in an “unauthorized assembly” — singing the protest anthem “Glory to Hong Kong” — or, in one case, holding up blank sheets of paper, symbolizing the loss of freedom of speech.

The latter action, held July 6 at a shopping mall, led to the arrests of eight people, the oldest being nearly 70.

The cases are pending, instilling fear in other possible protesters — as those who were arrested are referred to as “simmering in oil,” a Chinese slang phrase.

“They are trying to cleanse all free speech, putting fear among the people,” Lee told NPR last month. “And after you put fear, then the people began to start self-censorship.

“We are now not under the Hong Kong government,” he added. “We are directly confronting the Chinese Communist Party.”

More than five million Hongkongers hold library cards. Reading is considered one of the most inoffensive pastimes, particularly for young people.

But now, these digitized cards also can be used as an easy portal into people’s private lives.

Within days of the security law being announced, Hong Kong’s 70 libraries were advised by the Leisure and Cultural Services Department to remove an unconfirmed number of books — mostly written by local pro-democracy activists — until authorities could “review” them to determine whether they breached the new law.

This, despite the Code of Ethics of the Hong Kong Library Association declaring that one of its core “responsibilities to society” included the obligation to “uphold freedom of inquiry and uncensored flow of information” and “the principles of intellectual freedom.”

Even U.S. Secretary of State Mike Pompeo last month condemned the government’s “Orwellian” move as “the latest assaults on the rights and freedoms of the people of Hong Kong.”

One Hong Kong librarian, recently asked how the branch would comply with the new law, looked anxious and said, “I’m sorry I can’t talk about any of this” before hurrying away.

Meanwhile, the city’s annual weeklong Hong Kong Book Fair, held each July, was cancelled days before it was to start, because of rising COVID-19 cases.

Last year, the event hosted more than a million visitors.

But most local publishers and booksellers are relieved this year, fearful that the fair could result in prosecutions for selling politically incorrect books.

Despite censorship fears from the law, the U.S. video-streaming company Netflix — accessible in 190 countries and territories, including Hong Kong (but not mainland China) — said it was still studying the mandate’s details.

Netflix officials told local media last month that they only would consider expurgating two locally made films if the government made a formal written request.

Previously, however, the California-based company has removed films at the demands of the governments of Saudi Arabia and Vietnam, so pro-democracy groups are not optimistic.

Late last month, the Hong Kong government proposed that all of the city’s more than 175,000 civil servants be required to take loyalty oaths to both the local government and Beijing.

For decades, however, workers took the pledge to abide by the civil service code.

The new oath is expected to require civil servants to toe the government line — around the clock, even while not at work — and to assume their social-media posts would be subjected to the new regulation.

The first employees expected to take the oath are senior staffers, followed by police and legal personnel.

Journalists at Hong Kong’s popular pro-democracy Apple Daily newspaper, founded in 1995, have long been a thorn in Beijing’s side.

Recently, staff members have found themselves “doxxed,” where personal information is revealed online without consent as a form of revenge.

Apple Daily has reported that scores of its employees have been doxxed on a Chinese-language website — since taken down — and the information included full names, photos, office telephone numbers and job titles.

According to the city’s Office of the Privacy Commissioner for Personal Data, Apple Daily has disclosed that 40 of the more than 120 doxxed employees suspect their photos came from a single source: a Chinese government-owned travel agency that processes mainland visas for the newspaper.

Before being taken down, however, the site offered $130 to $645 for tips on “toxic journalists.”

For its part, the Privacy Commission noted that it had no legal power to sanction the Chinese travel agency, since its domain was registered outside Hong Kong.

Government harassment against Apple Daily long has been intense. It has included physical attacks on various newsstands that sell the newspaper, by Mandarin-speaking triad gangs.

Last year, the paper’s founder and publisher, Jimmy Lai, was arrested, charged with attending an unauthorized rally to mark the 31st anniversary of the Tiananmen Square massacre.

When apprehended at home, police demanded Lai hand over his cellphone. Any discovered evidence could be used against him at a later trial.

But early Monday, the 71-year-old publisher was re-arrested — this time charged with “suspicion of collusion with foreign forces against national security.”

Lai’s sons, Timothy and Ian, also were arrested — as well as other Apple Daily staffers and Agnes Chow, a 23-year-old politician who is known for leading pro-democracy protests, according to news reports.

China Daily, the official newspaper of the Chinese Communist Party, said Tuesday in a front-page report: “Civic leaders in the city said the operation (to arrest Jimmy Lai) showed the determination of the authorities to safeguard national security, while pointing out that press freedom is never an excuse for unlawful acts.”

As many as 200 Hong Kong police officers were used in the arrest — and in a subsequent raid on the offices of Apple Daily and its parent company, Next Digital — and Lai himself was led through the newsroom in handcuffs, according to reports.

He initially was arrested at his home, around 7 a.m., and brought to the newspaper’s offices.

The publisher was released Wednesday on $38,461 bond, along with an additional $25,800 security deposit. His sons and Chow also were released on bond Wednesday.

In addition, a warrant was issued for Mark Simon, an American who is a top Lai aide. He reportedly is in the U.S.

Last year, Simon sent his wife and two children back to the United States after his home address was published online.

“We are completely shocked by what’s happening now, with the arrest and followed by the ongoing raid inside the headquarters of Next Digital,” Chris Yeung, HKJA’s chairman, told The Associated Press.

“With the passage of the national security law and the really tough powers given to the police in their operations, we have seen now what we call ‘white terror’ become a reality, which will affect media organizations and journalists’ reporting.”

No trial date, or location, has been set for Jimmy Lai’s trial.

Meanwhile, an extra printing of the Apple Daily was made for Tuesday; 500,000 copies were printed, five times the standard number.

Its front-page headline read, “Apple Daily Must Fight On.” By 9 a.m., all copies were sold out.

And in a display of solidarity with the publisher, huge lines formed Tuesday morning outside Café Seasons, owned by Lai’s youngest son, Ian.