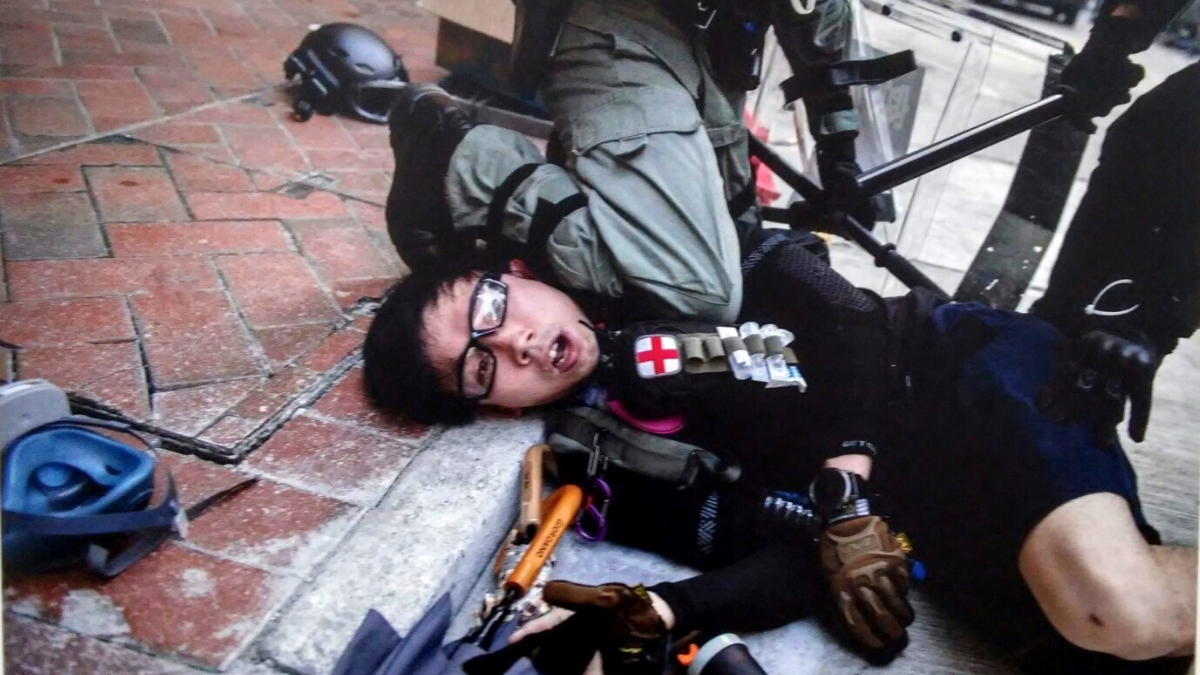 A Hong Kong riot officer with his knee near the neck of a protester during 2019 National Day demonstrations. The prize-winning photo was part of a global contest exhibit that was assailed by Chinese authorities. Credit: Nicolas Asfouri, Agence France-Presse.

In the nine months since the “national security law” was passed in June, Beijing has taken control over Hong Kong’s 33,000-strong police force.

It also has gained complete command over the city’s once-respected Education Department and its one million students and 100,000 teachers.

And with a rigid — “must sign or resign” — loyalty oath, China has successively intimidated its 180,000-member civil service department.

Apparently taking a page from the blunt-edged censorship decreed by Josef Stalin in the 1930s, CCP has announced that it will decide which types of artworks, photography and foreign films Hong Kong’s 7.6 million residents may see.

On March 29, Hong Kong’s leading commercial television broadcaster, Television Broadcast Limited (TVB), announced that — for the first time in 52 years — the station would not televise the annual Academy Awards show.

A TVB spokesperson told news media that the move regarding the 93rd Oscars “was purely a commercial decision.”

Meanwhile, the LA-based trade publication Variety reported that after TVB abruptly cancelled the planned screening, no other television station in the territory — cable TV, free-to air channels — had picked up rights to the lucrative program.

However, no one in Hong Kong seriously believes TVB dropped the Oscars as a financial decision.

“All artworks, if they are of value, raise questions and challenges. Challenging authority is one of the core values of art.”

The real reason? One of the Academy nominated films — “Nomadland” — was written, produced and directed by Beijing-born Chloé Zhao.

Zhao’s film, the story of a middle-aged woman traveling the American West while living out of her van and picking up short-term work, already has won a bevy of awards.

Then, at the 78th Golden Globe Awards in February, Zhao won best director of a motion picture and best picture in the drama category. Her winning four British Academy of Film and Television Arts (BAFTA) awards, including best film, came last week.

And, “Nomadland” has been nominated for the most prestigious film prize of all, an Academy Award, in six categories, including best director.

Should Zhao, 39, win as director, it will be a historic moment for the Oscars — making her the second woman in the honor’s history to receive a best director Oscar — and the first Asian female.

However, on March 5, in what The New York Times called a “patriotic frenzy,” CCP censored all mention of “Nomadland” on China’s social media.

So, why is Beijing keen on suppressing coverage of Zhao, both on the mainland and in Hong Kong?

One might logically assume CCP would be proud that Hollywood had nominated an ethnic Chinese for an internationally prestigious Oscar. Even more so that Zhao was the first female to win a best director’s Golden Globe since Barbra Streisand for “Yentl” in 1983.

China to Zhao: Zip It

The CCP long has been harshly critical of Zhao, even referring to her as a “traitor.”

Born to a wealthy family, she left China as a teenager for schooling in London, finishing her education in New York and Los Angeles.

A fan of filmmaker Spike Lee, she has few admirers in the Chinese government. In December, she said that “the U.S. is now my country,” though Zhao later claimed it was a misquote from an interview with an Australian website.

She previously had infuriated Beijing, in 2013, by telling a film magazine that as “a teenager in China …. there are lies everywhere.

“You felt like you were never going to be able to get out,” she told Filmmaker magazine. “A lot of info I received when I was younger was not true.

“I went to England suddenly and relearned my history,” Zhao said. “Studying political science in a liberal arts college was a way for me to figure out what is real.”

While Hongkongers long have been mindful of the omnipresent censorship on the mainland, they are shocked and saddened at how bold Beijing has been in its sudden and ferocious censorship of Zhao in Hong Kong, itself a significant moviemaking city.

The city’s Chinese-language social media has lit up in anger.

Political commentator Bruce Lui said last week that Hong Kong broadcasters were worried that “if the politically sensitive movies win the awards, winners may say something that the government considers unacceptable.”

On Facebook, one poster said: “Deng Xiaoping (former Chinese leader) promised that even after the 1997 handover horse racing and dancing will continue. But now, Hongkongers can’t even watch TV programs.”

Meanwhile, a more permanent suppression of Hong Kong’s art world now seems apparent, with the government announcing that it — and not professional curators — ultimately will decide what goes on display in its billion-dollar, soon-to-be opened West Kowloon Cultural District (WKCD).

Ten years in the making, the harborside complex is one of the largest cultural projects in the world. When opened at year’s end, it will hold venues for art exhibitions, films and plays.

But now, Beijing has decided that any artwork shown first must be vetted by government “supervisors” before the district’s artistic directors put them on display.

“If there are any works that the national security department thinks … (have) violated the law, we will act according to the law.”

This statement came last month because the vice chairman of the pro-Beijing’s New People’s Party, Eunice Yung, had asked Hong Kong Chief Executive Carrie Lam during a legislative session if officials would check whether artworks to be displayed might violate the security law.

Yung added that artistic shows at WKCD’s M+ Museum would cause her “great concern.”

But 48 hours later, Ai hit back — telling Hong Kong public broadcaster RTHK: “All artworks, if they are of value, raise questions and challenges.

“Challenging authority is one of the core values of art,” he said. “And if she thinks artworks are just ornaments, then I’d say she doesn’t understand art.”

Ai, 63, is far more loathed by Beijing than filmmaker Zhao.

The son of one of China’s most renown poets, CCP officials accused the father of not being patriotic enough. The family then was exiled to a labor camp in a remote province.

Despite this, Ai became a highly respected artist, even serving as the leading artistic consultant in designing the iconic Beijing National Stadium, popularly known as the “Bird’s Nest” and the main venue for the 2008 Beijing Olympics.

His later works became tied to the fight for free speech in China — and he was arrested at Beijing’s airport in April 2011 and held for 81 days without explanation. He fled in 2015.

In 2008, writing in The Guardian, a British newspaper, Ai spoke out against his work on the stadium: “The Bird’s Nest National Stadium, which I helped to conceive, is designed to embody the Olympic spirit of ‘fair competition.’

“It tells people that freedom is possible but needs fairness, courage, and strength.

“However, almost 60 years after the founding of the People’s Republic,” Ai continued, “we still live under autocratic rule without universal suffrage.

“We do not have an open media, even though freedom of expression is more valuable than life itself.”

Ultimately, it was decided last month that none of Ai’s works would be shown at the M+ Museum.

Henry Tang, the government official in charge of the WKCD told reporters last month: “If there are any works that the national security department thinks … (have) violated the law, we will act according to the law.”

He added that he welcomed vetting by the police’s new National Security Unit.

Members of the city’s cultural community fear that Hong Kong’s days as a respected hub for artistic freedom now are numbered.

Meanwhile, despite its political distaste for many Hollywood films, Beijing just released its own state-sponsored movie, “The Wings of Song,” a musical possibly inspired by the 2016 U.S. blockbuster “La La Land” starring Ryan Gosling and Emma Stone.

The CCP-financed flick features a rural community of ethnic Uighurs living an idyllic lifestyle with no sign of oppression or mass surveillance.

“A free and independent press is vital for maintaining stable and resilient societies.”

Though the cast is colorfully dressed as they happily sing and dance, nowhere in this feel-good film does any of the actresses wear traditional hijabs — coverings of the head and shoulders but not of the face — a key requirement of their Islamic faith.

The story’s core tells the tale of three young men — a Uighur, a Kazakh and a Han Chinese — who come together to chase their musical dreams.

Anne-Marie Brady, professor of Chinese politics at New Zealand’s University of Canterbury Zealand, told The New York Times two weeks ago that the international campaign to promote Uighurs was the biggest she had seen on a single topic.

“It’s shrill and dogmatic, it’s increasingly aggressive,” she told the Times. “And it will keep going, whether it is effective or not.”

Jointly organized by the Amsterdam-based World Press Photo Foundation, and the Hong Kong Press Photographers Association, the exhibition was to be held on the university’s campus.

Baptist University officials cited COVID-19 restrictions for the sudden cancellation, just 72 hours before the exhibition was to open.

But the actual reason, sources told Digital Privacy News, was that university leaders became worried after a Beijing-owned newspaper claimed some images could “incite violence.”

The problem: five prize-winning images from last year’s contest, under the title, “Hong Kong Unrest” by Nicolas Asfouri, a photographer for Agence France-Presse.

One image showed a Hong Kong riot police officer with his knee on the neck of a protester during demonstrations in the Wan Chai area on National Day in 2019.

Demonstrators had responded to the anniversary of the founding of Communist China with a “Day of Grief.”

In the end, the exhibit was moved from Baptist University to a commercial gallery.

A professional Hong Kong photographer attending the exhibit said informally: “All the talk of increasing censorship in Hong Kong has been great for us!

“Because of that, we have seen far more visitors than we expected — thousands of young Hongkongers have been coming every day of the exhibition.

“We are all practicing safe social-distancing here, but no one wants censorship in Hong Kong. None of us.”

“No one wants censorship in Hong Kong. None of us.”

A professional photographer at an exhibit in Hong Kong denounced by Chinese officials.

Arjen van den Berg, the Dutch consul-general in Hong Kong, told reporters at the exhibit’s opening: “I am very happy that, despite the global pandemic, the World Press Photo Exhibition has been held in Hong Kong.

“With its powerfully evocative images, this exhibition bears testament to the important work photojournalists do all over the world in bringing us stories that matter,” he added.

“It reminds us that a free and independent press is vital for maintaining stable and resilient societies.”